Yesterday we got up reasonably early and presented ourselves at the first lock going into Vincelles as we knew there was a Wednesday market on.
Unfortunately the lockeeper wasn’t so punctual. He was nowhere to be seen. We honked the horn after waiting 10 minutes. Nothing. I jumped off the boat and knocked on the lockeeper’s house, then his windows, rang the bell, yelled ‘bonjour?’ Still nothing.
Eventually a nearby fisherman came over and we decided to operate the lock between us. The fisherman was a lovely guy and just as we had opened the gates to leave the actual lockeeper arrived on his motor bike, now an hour late, saw we had things under control and departed again.

We continued on to Vincelles (just around the corner), tied up and visited the market.

We had a quick breakfast of tartines and turned around and headed back the way we came and tied up again in Bailly for the lunch hour. On the canals the locks are closed from 12-1pm and on the River Yonne it’s 12.30-1.30. 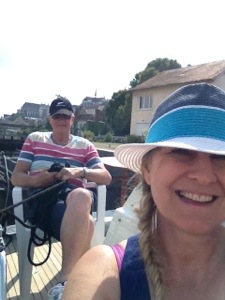 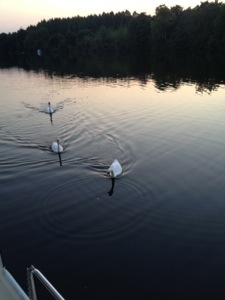 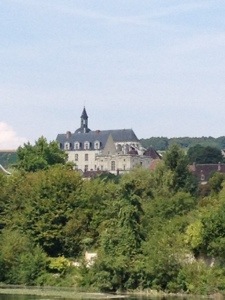 After the locks reopened we carried on heading north, back through Auxerre, this time without stopping, and as the weather was so beautiful we didn’t stop until we came to Gurgy at around 6pm. In all today we tackled 14 locks and travelled 28kms. Depending on how deep and long the lock is, and if it is set in our favour or not, the locks can take half an hour so it was a big day for us.
It’s amazing how much more pleasant it is when the sun’s shining.

Last night we tied up at a free mooring in Gurgy. Great spot and we met a couple from Scotland who own an ex-hire Le Boat boat and travel for the summer. Also tied up were an English couple, Will and Emma, travelling with their teenage daughter and friend. They had hired the kind of boat we had booked. 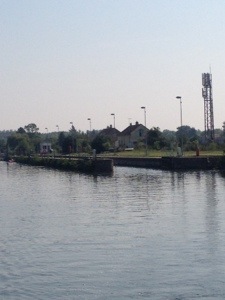 This is one of the big locks on the Yonne. Made for lots of Peniches (the large commercial barges). These locks were only 1-2 metres deep but very long so take a while to fill.

Alan and I divide our time between our apartment in Christchurch, New Zealand, and our 11.5m Dutch Cruiser, Silver Fern, on the canals in France. We started out hiring and eventually bought our boat in 2014. The two summers lifestyle is wonderful and we feel very lucky!
View all posts by khodges2013 →
This entry was posted in Holiday 2013. Bookmark the permalink.