I found some essentials on the 6th floor… 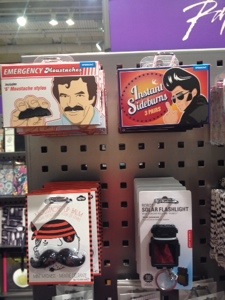 And then it happened…departing through the front doors I was called back by une grande homme and accused of shoplifting. 😳
Mais, I said. I didn’t even buy anything.
Ah hah. He said, Exactament!
‘Have a look dans mon sac’ I said.
‘Est-ce que parlez anglais?’
Apparently not as at this point he invited an interested onlooker into his interregation to interpret.
Shoppers stood back as the criminal made her case.

‘But, but, but. I didn’t. I wouldn’t. I don’t know why my bag is setting off alarms’!
Alan stood back. Way way back. Can’t blame him. You don’t want to be associated with the low life.
Also he might have to provide bail money.
I waved my bag back and forth, back and forth.
Horns sounded. Alarms klaxoned (can alarms klaxon? Do klaxons alarm?)
The gendarmerie stormed in, Black Ops abseiled down the facade of the building “hike, hike, hike”
Oh wait that was the Blues Brothers.
Annywaay, long story short (too late, I fear) they couldn’t pin anything on me and I slunk out the door (to the cacophony of the aforementioned alarms and klaxons) and on my way.

And so, what have I learned from a day and a half in Paris?
1. I have observed trench coats are IN. There were a few anoraks and leather jackets but mainly the Trench. Tres chic, tres Inspector Gadget.
B. Electronic cigarettes are very popular. They even have specialised shops selling them. Still plenty of real smokers though. It wouldn’t be France without the stench of tobacco.
III. Contrary to popular opinion (ok, mine) Parisians do eat while they walk. So much for the 2 hour long lunch. Parisians are very busy people.
And lastly, I need to check if my face is on any Wanted posters before I show it again in any shops on the Grand Boulevards.
My work here is done. We’re off to Toulouse.

Alan and I divide our time between our apartment in Christchurch, New Zealand, and our 11.5m Dutch Cruiser, Silver Fern, on the canals in France. We started out hiring and eventually bought our boat in 2014. The two summers lifestyle is wonderful and we feel very lucky!
View all posts by khodges2013 →
This entry was posted in Uncategorized. Bookmark the permalink.

6 Responses to The saga continues…