Tied up on the banks of La Petite Saône

Today is Wednesday, July 2nd. We left St Jean-de-Losne yesterday around lunchtime and planned to cruise up the Petite Saône until we found a spot deep enough to moor up the boat without running aground, but also shady and accessible. We realised we should have bought a gangplank to add to the boats equipment, then we could get ashore without having to jump from the side of the boat. Last year we hired a rental boat and I jumped ashore straight into a patch of stinging nettle! That was added to the bed bug bites I already had so you would think I’d have considered this essential!

After exploring one potential spot and hitting the bottom, our skilled captain spotted another possibility a little further ahead and brought the boat in superbly, close enough that jumping ashore was easy (and no stinging nettle!). We cranked up the generator to boil the jug for a cup of tea and sat back feeling pretty proud of our first wild moor.

We have been surprised at how few boats have cruised past. This part of the Saône, above Seurre, is called La Petite Saône. It meanders through the Franche-Compte area, past small country towns and villages and ends at Corre. The locks here are automatic, the Freycinet gauge size (40m x 5.20m) and are set from your boat by driving under a rod that hangs in the middle of the river. The Big Saône has the European big gauge locks (185m x 12m) which are operated from a control tower. It is used by commercial barges and has quite a lot of traffic, and runs from Seurre to the junction with the Rhône river. I much prefer this quiet part of the Saône. The scenery is very rural, treed along the banks and beyond, fields of wheat, corn and maize.

There are fewer places to buy the daily baguette though. We went for a walk this morning towards the village about a kilometre away called Laperrière-sur-Saône. No shops at all so we carried on to St-Seine-en -Bâche where they have an infants’ school but again no boulangerie. None were marked on the map so we weren’t surprised. We then headed for the river and came back along the tow path. It was a good 2 and a half hour walk. Alan’s foot seems ok but he put it up after that just in case the swelling returned. My joints were really aching by that stage. We are definitely nursing a few injuries! (I think I’ve only fallen up or down the stairs on the boat twice so far which isn’t bad. For me).

Last nights sunset was unbelievable! My Facebook friends must have been getting annoyed at all the photos I put up there but I just couldn’t stop. The view changed every minute and the shots I was getting were dramatic and colourful. I must print some out when we get home and frame them although it’s always hard to capture the full ambience of a moment in a photo.

We have decided to stay here for another night. It’s free! And obviously desirable as a few fishermen have arrived and turned and and left again. However we will run out of milk soon and no tea or coffees may cause a mutiny (by me) so we will head up to Auxone tomorrow to replenish our supplies before heading off again.

And by the way since I started writing this blog post and mentioned the lack of traffic, 4 boats have been by. Practically rush hour! 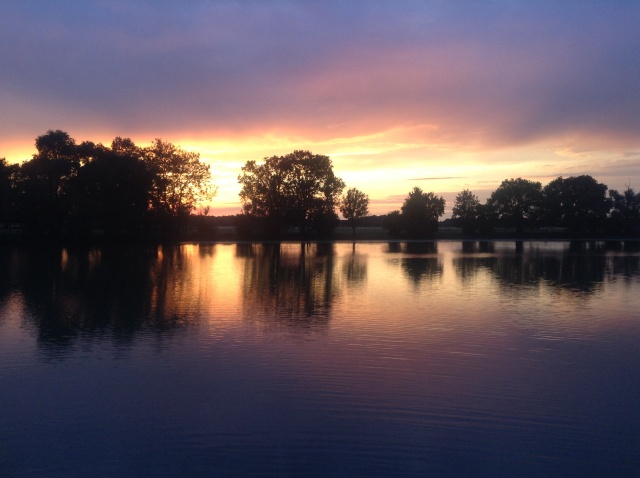 Alan and I divide our time between our apartment in Christchurch, New Zealand, and our 11.5m Dutch Cruiser, Silver Fern, on the canals in France. We started out hiring and eventually bought our boat in 2014. The two summers lifestyle is wonderful and we feel very lucky!
View all posts by khodges2013 →
This entry was posted in Canal boat, France, Holiday 2014, Petite Saône, Travel, Uncategorized and tagged burgundy, canal boat, Petit Saone, Saone, St Jean-de-Losne, sunset. Bookmark the permalink.