Continuing on from my last post we arrived into St Jean de Losne on Thursday May 14. Our boat has been moved from last year’s mooring to another spot on a different pontoon, jammed beside an old barge that is for sale and the bank. (We are hoping to move soon as this spot will be a nightmare to get out of so we only want to have to do it once.

The boat was very dirty and a little sad looking on the outside. 8 months of neglect showed. Inside, although musty, things were looking much more positive. The only mould we found was inside the fridge. Our clothes and bedding had fared well during the winter and we could make the bed up straight away. Opening the windows to let the breeze in, soon the interior was refreshed and there were no lingering odours. Really it was more than we could have hoped for. With the electricity already plugged in we settled down to a lovely cup of tea and took a moment to relax and admire our new Bimini. It had been made over the winter and installed a week ago and it looks amazing. 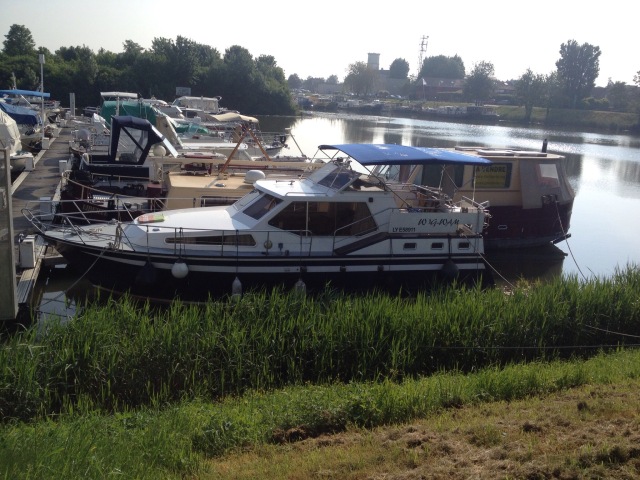 As you can see we haven’t changed to the name on the boat yet but Alan is working on scraping the WigWam off as I am writing this.

Friday dawned cold and rainy, a great day to stay inside but as we were lent a high pressure hose from the capitainerie we were outside ridding the exterior of those 8 months of dirt. Alan took charge of the hose and I got lumbered with the scrubbing broom. Guess that’s what happens when you’re the mate and he’s the captain 😓. After 3 hours of industriousness (is that a word?) Silver Fern was looking fantastic, shiny and sparkling. Definitely a job well done. Later on we drove to the local Intermarche and stocked up on supplies including our favourite Rosé in a cardboard box. 3L for 13€ is a bargain and it’s a great quaffer as is the Peniché, the French version of a shandy. They are both perfect for quenching one’s thirst on a hot day.

Speaking of hot days, Samedi (Saturday) was warm and sunny as is today, Dimanche (Sunday). Yesterday we took advantage of still having the rental car and drove back to Dijon to check out Decathlon, a large sporting store. Driving there we wrestled with the French GPS which was insisting we go on the motorway. No matter how hard we tried to avoid it. It’s fair to say we struggled and drove a very, shall we say, scenic route, in large circles, but finally reached the said sporting store, triumphant.

Of course now that we had made it we really hoped it was worth all the trouble and it was. We found a great camping table and chairs, much more convenient than the large plastic thing we inherited with the boat, 2 small sun loungers and a portable BBQ. Here is the table… 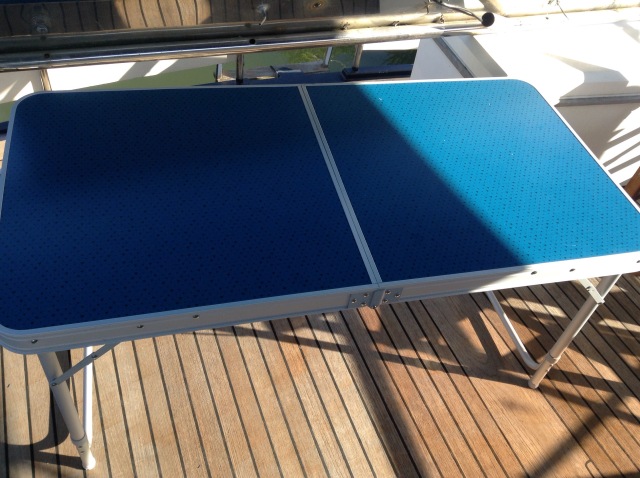 And, cunningly hidden underneath, are the little stools… 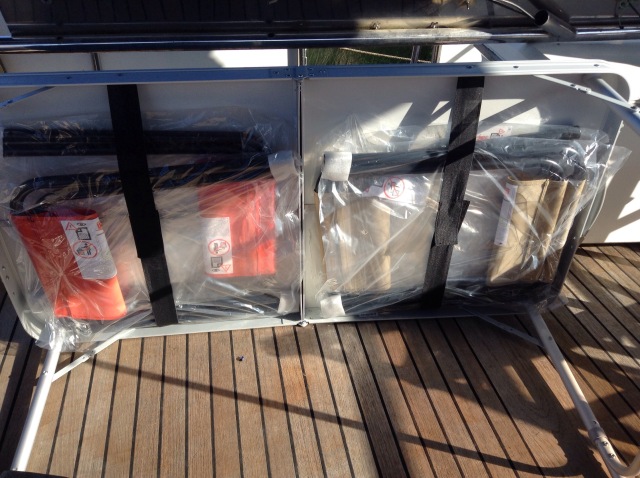 Last night we took advantage of the warm evening and strolled along the quay catching up with some other boatees from New Zealand and England. 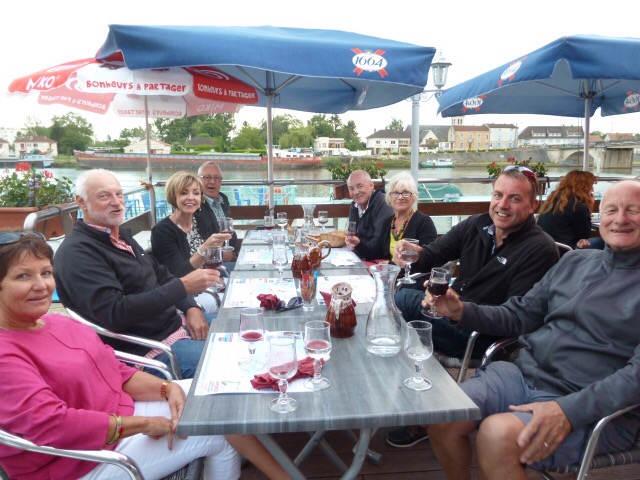 Today, having taken a firmer hand with the GPS, we drive on the D roads (toll free and much more scenic) to Beaune, a gorgeous wine town in the Côte d’Or area, only 30kms from St Jean de Losne by car. It’s not on a canal or river so having the car was perfect. First lunch… 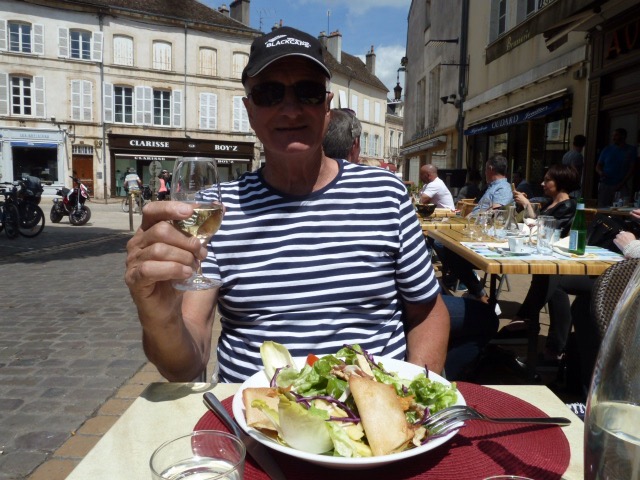 (Terry and Roz we thought of you and drank to your health😄) followed by an incredible visit to Patriarche who have the largest wine cellars in Burgundy. The history of this Cave is interesting. Originally the Convent of the Sisters of the Visitation it was built in 1632 but confiscated during the French Revilution and went to rack and ruin until purchased by a local winegrower from Savigny-les-Beaune, Jean-Baptiste Patriarche, in 1796, primarily for it’s incredible vaulted cellars, a labyrinth of 5km. 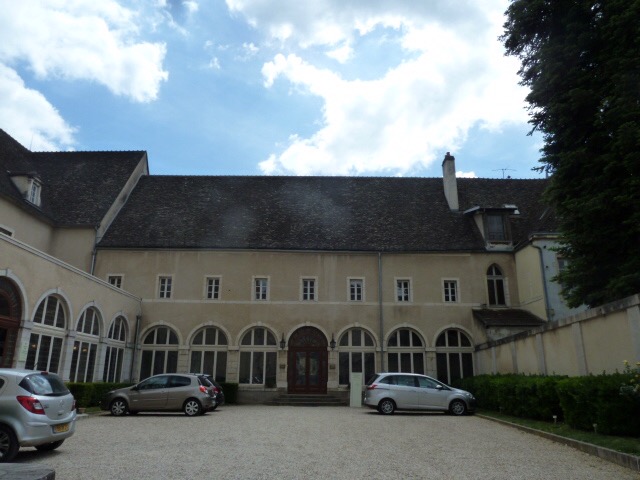 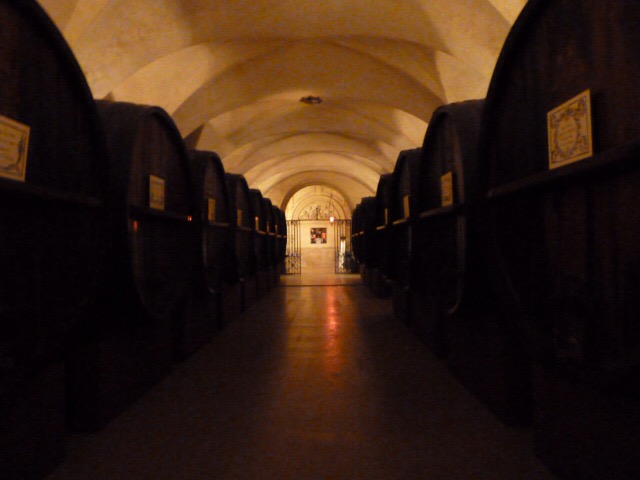 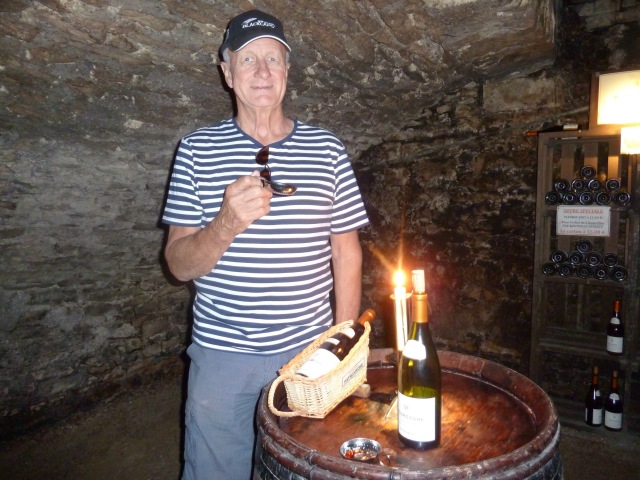 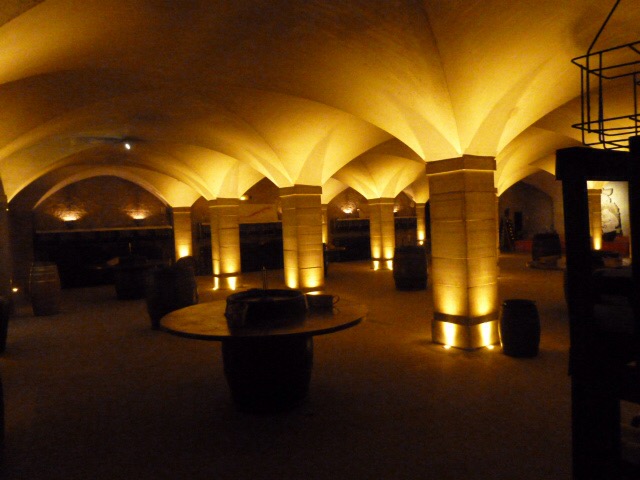 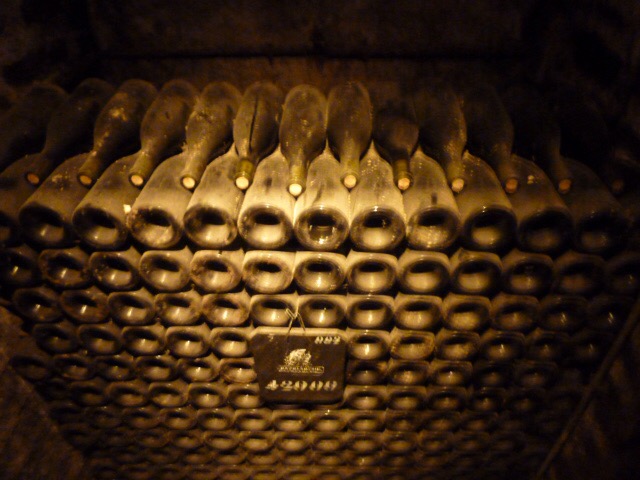 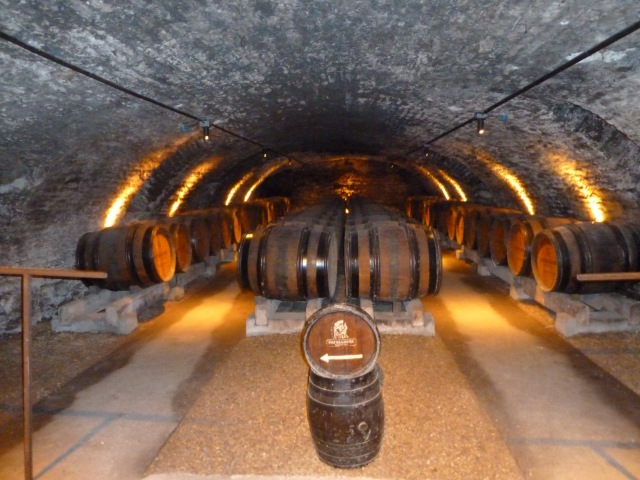 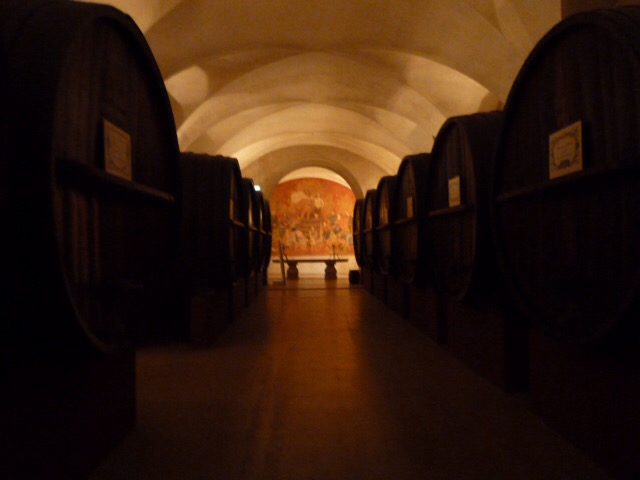 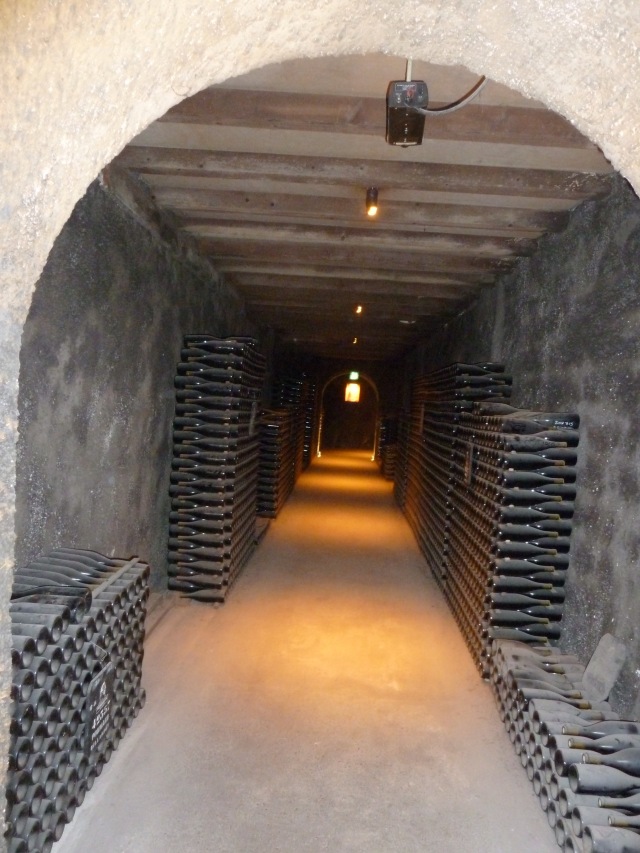 For €16 one gets a cute wine cup and a chance to wander the cellars, tasting the delicious vins blancs et rouges. There are three whites and 10 reds to try, including… 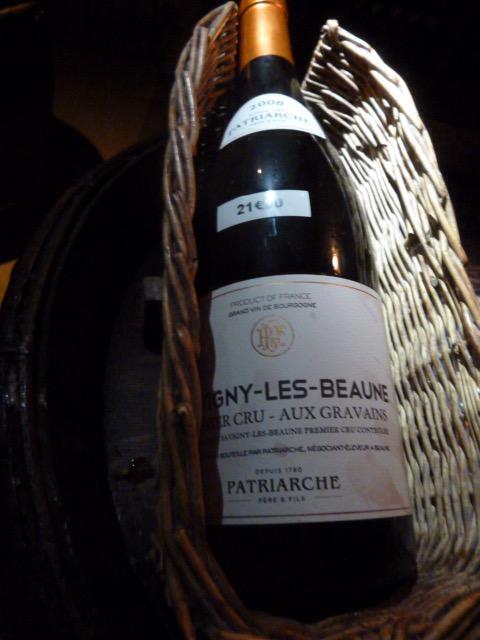 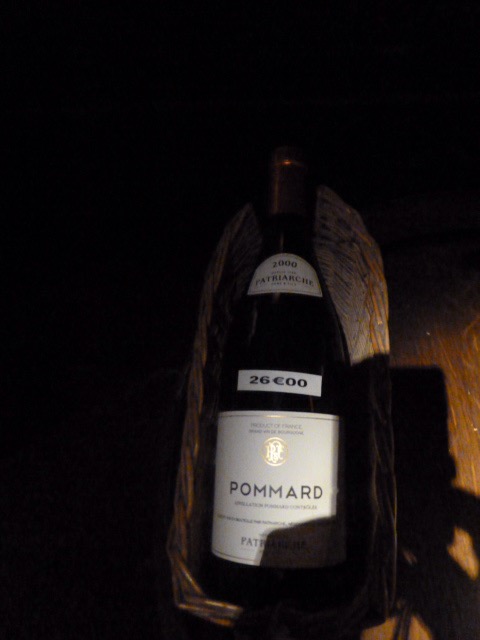 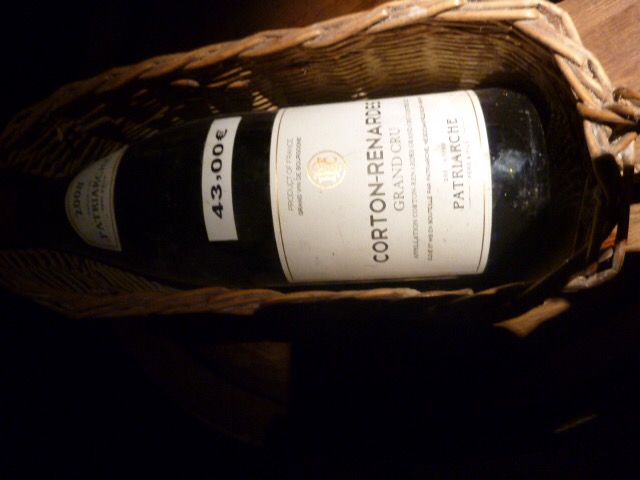 That last one was unbelievably good. I guess hence the price. I also tried their Creme de Cassis which, when mixed with white wine, becomes the tradional Kir and with sparkling wine, a Kir Royale. Yum.

After such an arduous afternoon of wine tasting we headed back to the boat and I am now sitting out of the deck enjoying the last of the suns rays, listening to the church bells. Not a bad day. Not a bad day at all. 👍🏽

Tomorrow we will be checking out the possibility of purchasing some second hand bikes and drawing up a list of work to be done before we can head out for a new adventure.

Alan and I divide our time between our apartment in Christchurch, New Zealand, and our 11.5m Dutch Cruiser, Silver Fern, on the canals in France. We started out hiring and eventually bought our boat in 2014. The two summers lifestyle is wonderful and we feel very lucky!
View all posts by khodges2013 →
This entry was posted in Beaune, Canal boat, French Canal boating, Holiday 2015, St Jean de Losne, Uncategorized and tagged canal boat, Canal boating, St Jean-de-Losne. Bookmark the permalink.

10 Responses to The arrival continues…