There were highs, there were lows…

It’s fair to say that today didn’t start well. Initially all seemed fine. We got up early (for us). I wandered across the pedestrian bridge to the Île Saint Laurent for the morning baguette while Alan topped up the water and got the boat ready. However I returned to find the boarding ladder had fallen into the river and had disappeared, never to be seen again. Damn! Should have put a bungie on it. Luckily we have a spare so it wasn’t a total disaster. So off we toddled, back onto the Saône, this time heading north toward the Canal Du Centre, only 3 kms away. About half way there we heard an alarm ringing. This is never a good sign on a boat. And unfortunately the warning light on the water temperature light was flashing red as well. At this point we are in the middle off the reasonably large river. Alan decided to turn the engine off while he took the cover off to check the water filter to see if it was blocked. No it looked fine. The engine was hot though, not good.

Our Irish friends, John and Nancy, who we had been travelling with for the last couple of days waited for us as we made a decision about what to do. In the end we decided to continue on to the Centre, go through the first lock and limp on carefully to the next place to tie up.

So onto the massive lock that marks the start of this waterway. The lock is around 11metres high. We went in first. Did I say it was a massive lock? 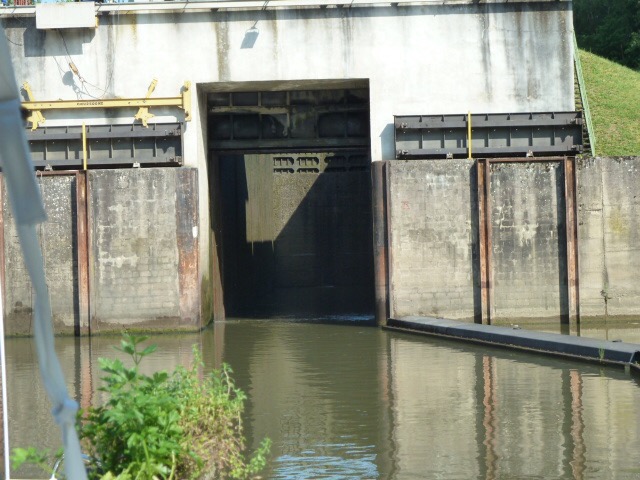 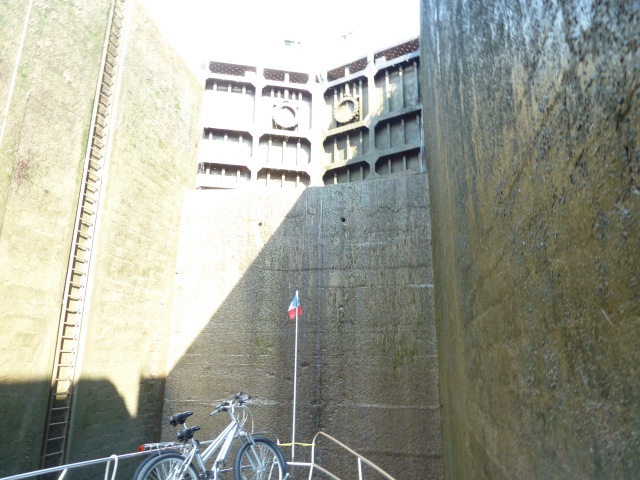 The lock isn’t long, only enough room for 2 boats like ours, and so the height is really striking. However there are floating bollards which means you can tie onto one and it will float up as the boat does. No having to try to reach the top to put a rope on there. It was a gentle rise in the end. Nothing too scary. Anyway, Alan decided to turn off the engine to allow it to cool down while the lock filled. When it was time to leave he turned the engine back on and, gasp, the water temperature light stayed off and so did the alarm! We figure that the lock process must have sucked out whatever debris that was clogging up the system. We headed out of the lock and onto the Centre feeling very relieved.

We motored on to Fragnes, a few kms up the canal, taking the Bimini down as we went for all the low bridges and moored up in front of the lovely restaurant, Fleur de Sel. John and Nancy carried on and after we had tied up and spoken to our neighbours and the capitanere (there is a fishing competition tomorrow morning and we will have to move the boat for a few hours), we hopped on our bikes and headed down the towpath to check out the locks coming up and say good bye to our Irish friends. 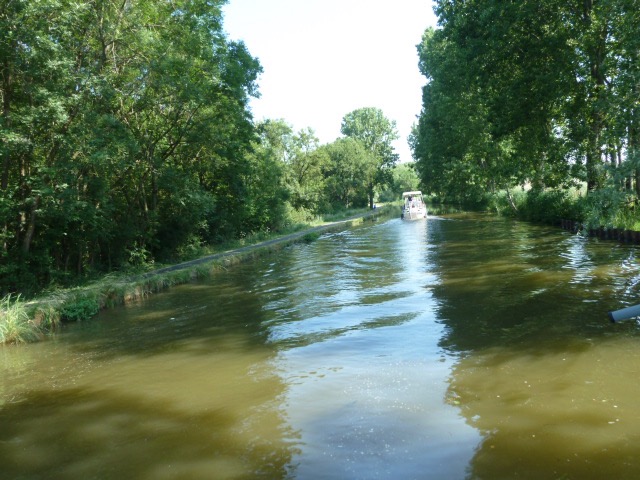 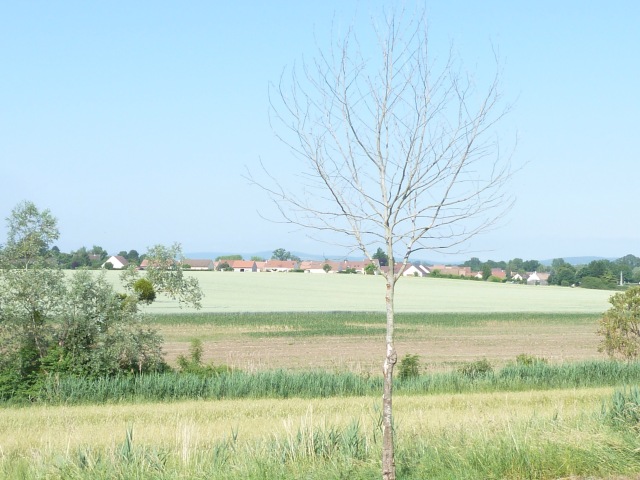 Later we decided to celebrate our good fortune by indulging in a lovely lunch at the aforementioned restaurant. Delicious. I had the fish followed by citron sorbet, Alan chose the rump steak and fruit compote. Accompanied with a crisp white wine while overlooking our boat. 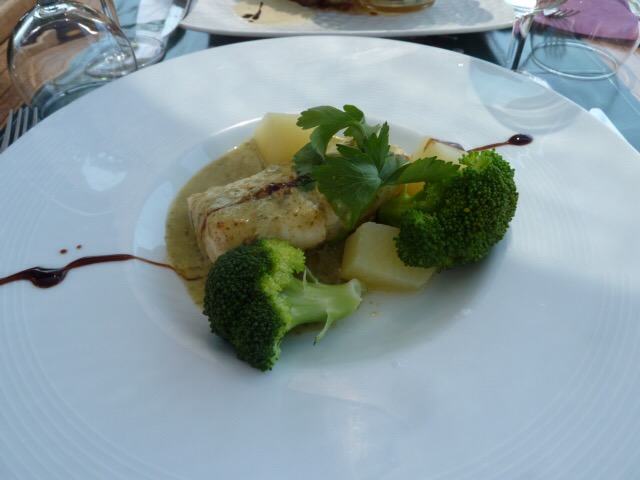 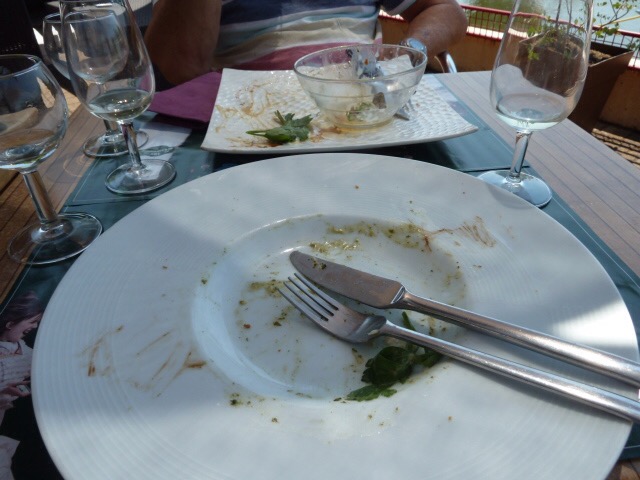 It’s been another scorcher of a day here. But as I am writing this the sun is slowing going down as is the crisp rosé we are drinking. There is an aerodrome near by and we have been entertained by some amazing aerobatics. Speaking of aviation we have decided to write up a series of checklists so we don’t miss stuff. (You can’t take the pilot out of a pilot)

Before start checklist (Check that the boarding ladder is fixed properly before putting all our weight onto it and losing it over the side. Also do we have enough wine because at this point it’s not too late for a quick trip to the Carrefour).

After start checklist (Are all the warning lights extinguished. In particular is the water flowing through the engine).

Cast Off checklist (Bring in the boarding ladder, disconnect the power cable and are all the ropes untied. We haven’t tried to leave with the power cable still attached to ground power yet but wouldn’t that be embarrassing).

Cruising checklist (is the ship ship shape and ropes all tied up for the next lock and engine parameters are all normal…what ever that means…something to do with being green?).

Premooring Checklist (water depth suitable…running aground can be a real downer…can we actually fit in between those two barge).

If anyone feels the need to help us with our checklists please leave your suggestions in the comments section. And remember this is a G rated blog 🙂

Alan and I divide our time between our apartment in Christchurch, New Zealand, and our 11.5m Dutch Cruiser, Silver Fern, on the canals in France. We started out hiring and eventually bought our boat in 2014. The two summers lifestyle is wonderful and we feel very lucky!
View all posts by khodges2013 →
This entry was posted in French Canal boating, Holiday 2015, Travel, Uncategorized and tagged canal boat, Canal du Centre, Chalon sur Saone, Fragnes, Saone. Bookmark the permalink.

4 Responses to There were highs, there were lows…