Playing with the big boys on the Seine and Yonne.

Today is Tuesday and as planned we departed Montargis. We booked a 9am start time at the first lock but somehow nobody had passed it on to the eclusier on duty and we had to wait for a barge (more kiwis!) to come through the other way. Ce n’est pas grave, its fine. What was not fine was that our bikes were stolen on Sunday might. Locked to each other and around a large tree. C’est grave! Not sure that translates but you get my meaning. Very disappointed. And now no off the boat transport so it’s back to legging it.

However Montargis is a lovely town. Definitely worth staying a few nights. Called Little Venice, it’s has a network of small canals all around the town with flowers everywhere. Tubs of geraniums floating in tethered rowboats, along every bridge and just about every other surface not used by something else. I wish I knew how they achieve such a multitude of stunning displays during what has been a heat wave. Must be in the soil, the compost and perhaps liquid  fertiliser. I am green with ‘green thumb’ envy! 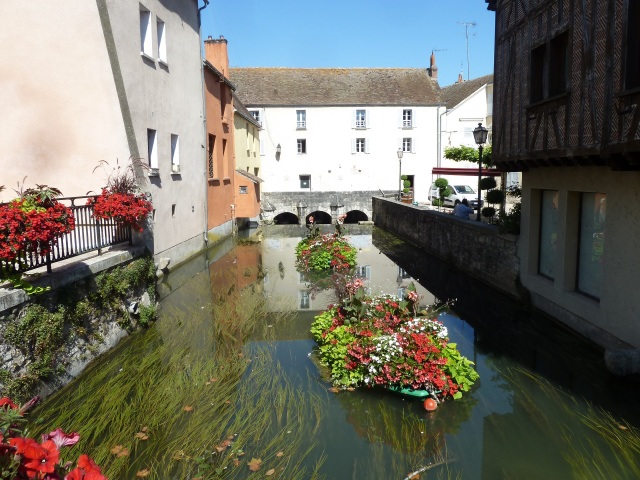 We left Montargis and cruised along the Canal de Loing, running parallel to the Loing river. It’s quite rural and very beautiful, trees shade the canal and we pass a few small villages. We were given a remote control at the first ecluse today (number 33 on the Canal de Briare) which we have used since lock one on the Loing canal. Like the Rhone au Rhin canal that we navigated last year you get within 150m of the lock and push the button which sets the lock in motion automatically. Very smooth, no problems so far. We moored up in Nemour. Another gorgeous (I need some better superlatives) medieval village. Had to squeeze into the spot and put a double adapter on the electricity, sharing it with a campervan.

The next morning, Wednesday, we got up early and walked to the market, stocked up with fresh salad veges (the tomatoes on the vine are gorgeous) and headed back to the boat. We are putting in long days on the canal at the moment because we figure we should get on to the Canal de Bourgogne asap. Also there is no closing at lunchtime with the remote. The scuttlebutt is still that it may close but it’s still open so we continue on in that direction.

We arrived in the fortified town of Moret-sur-Loing at the end of the canal. Lots of tourists here and I can see why. The church is spectacular. So was the beer we had next door! For art historians this is where Sisley, the impressionist painter, was born. There were a mix of nationalities on the pier, two Aussie boats, an American and a few French. Plus masses of barges both pleasure and commercial. The Loing river runs through the town and people were swimming and sliding down the rocks onto the pond below. The atmosphere was wonderful and I really enjoyed being part of it.

Thursday. We depart the canal system for a while. Casting off, we headed onto the Seine river. This is getting serious. Loads of peniches, most laden down with cargo and others sitting up high, obviously empty. We come up to the Varennes Lock, and it’s a massive commercial lock. More than 60 barges go through this everyday and so we found out. As we approached we saw one ahead of us, waiting for the lock to open, and two massive barges motoring up behind us. We pulled aside to let them through and they cruised past, one overtaking the other. We slowly pulled in behind the third barge which is 80metres long, and follow him on the approach to the entrance, hoping we can squeeze into a spot at the back. I’m not going to lie, I’m nervous. The first boat in is a green peniche, then a massive peniche follows him and takes up the rest of the space. That leaves our 80m friend, Freedom, and us out in the cold. We tied up to the bank behind Freedom and since the bollard is too far away to tie onto we put two stakes in the ground and tie front, middle and back ropes on as the current is quite strong. And we wait. It will take a while for the lock process to complete, then boats on the another side will come through before the lock will be set for us again. Let’s hope no more massive peniches come from behind us as they have priority we could be waiting a while for our turn! We are hoping to get to Villeneuve-sur-Yonne today, move than 30kms away but we may not make it if this holds us up too much.

Alan has just come back from a reccie and said the two barges are out and a tiny speed boat is in there on its own. Freedom are taking the opportunity to fill up their water tanks while they wait.

Now the lock doors are opening and out comes the speed boat. We start the engine as does Freedom. But wait, here comes another peniche around the corner. And so he steams straight past and into the lock first. Freedom follows behind. They fill up the whole of the left hand side. But there is a space along side Freedom and so in we go. Tying up was a small issue as the bollards to tie to are too far apart for us. So I lasso the front rope on while Alan uses the boat hook to keep the back in. Then I lasso the back rope onto the same bollard and we are good. The back gate is already shut now but I can see people in the control tower watching so I assume they waited to open the sluice gates until we were secure. After that it was pretty simple. A small rise, under 3 metres, and we all leave single file. Us last of course.

Off come the life jackets. Yay. We have our ships papers ready as they can ask to see them here apparently. But no one did. And we out and still on the Seine with barges tied along its banks for miles.

Soon we arrived at the turn off for the Yonne. And another lock. This time much smaller but it, like most on the Yonne, has sloping sides. Apparently this makes the lock walls stronger but it also makes tying onto a bollard without hitting the sloping side very difficult. There is a lock keeper who collected our rope and slipped it over a bollard but Alan had to use the engine and occasionally the bow thruster to keep us under control. Hopefully the next lock in 4 kms has a floating pontoon!

Ok so the next one didn’t and actually proved to be pretty tricky. Let’s just say we may have left some blue paint on the stone waiting quay and I nearly got the anchor drilled into my skull. The less said about that the better. Stupid sloping sided locks.

And so the day wore on. Often large barges coming towards us had right of way so there was a lot of hanging around in the river. Lots of commercial barges, some more like ships. We are certainly not on the lovely quiet canals anymore! We had hoped to at least make it to Sens today but the canals close at 6pm on this part of the Yonne so we decided to pull into the last spot on a pontoon at Pont-sur-Yonne. No power or water but that’s fine. We may run the generator later.

A big day! 8 hours and it really feels like it. Lots of adrenalin! Time for a swim!

The boat behind is actually twice the width of the one in front! 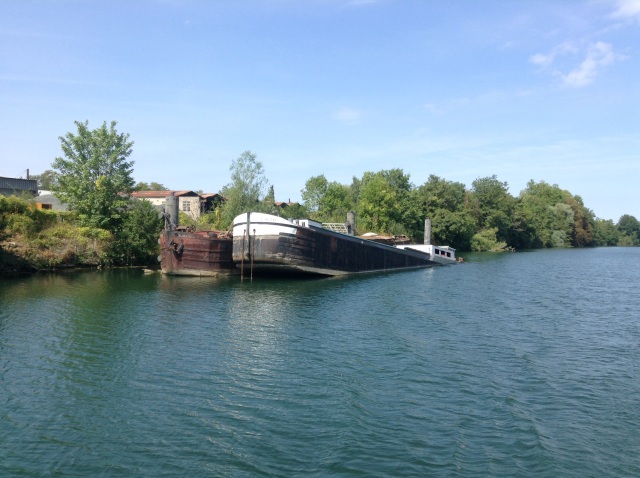 I think there may have been a load control issue…

Thats it for this episode of Silver Fern’s Intrepid Journey. Stay tuned…

Alan and I divide our time between our apartment in Christchurch, New Zealand, and our 11.5m Dutch Cruiser, Silver Fern, on the canals in France. We started out hiring and eventually bought our boat in 2014. The two summers lifestyle is wonderful and we feel very lucky!
View all posts by khodges2013 →
This entry was posted in Canal boat, French Canal boating, Holiday 2015, Montargis, Seine, Yonne and tagged Canal boating, Montargis, Moret-sur-Yonne, Seine, Varennes Lock, Yonne. Bookmark the permalink.

6 Responses to Playing with the big boys on the Seine and Yonne.