Montbard to Pouillenay. The start of the staircase locks.

on the ropes leaving Montbard

Monday July 25. The weather was warm but a bit cloudy, perfect weather for our 9 locks and 13kms journey. We were up and ready to go by 8.45 so headed into our first lock of the day and were ready and waiting when the young student eclusier arrived at 9.05. She stayed with us for two locks then another student took over. Again, so far, we have had lovely smiling service at each lock.

Two holidays in one, boating and white water rafting.

At our fifth of the day we caught up with a small peniche flying a British flag and so travelled in tandem with them until they stopped in Venerary. There are only three bollards on the left side and none on the right in most of these locks and we only had the back one to tie on to so we used the middle line on the bollard and had to put the back line on the ladder.

The countryside is rolling hills, Charolais cattle and crops. Lots of villages along here each with a church. Every now and then the French airforce came to say Bonjour in a low level fly by that was so loud and low it made me duck my head, thinking we were being invaded. Alan thought they might be Mirages doing some kind of navigation exercise perhaps. Very loud but impressive. Later on four of them raced overhead very low. Off to the Officers Mess no doubt. 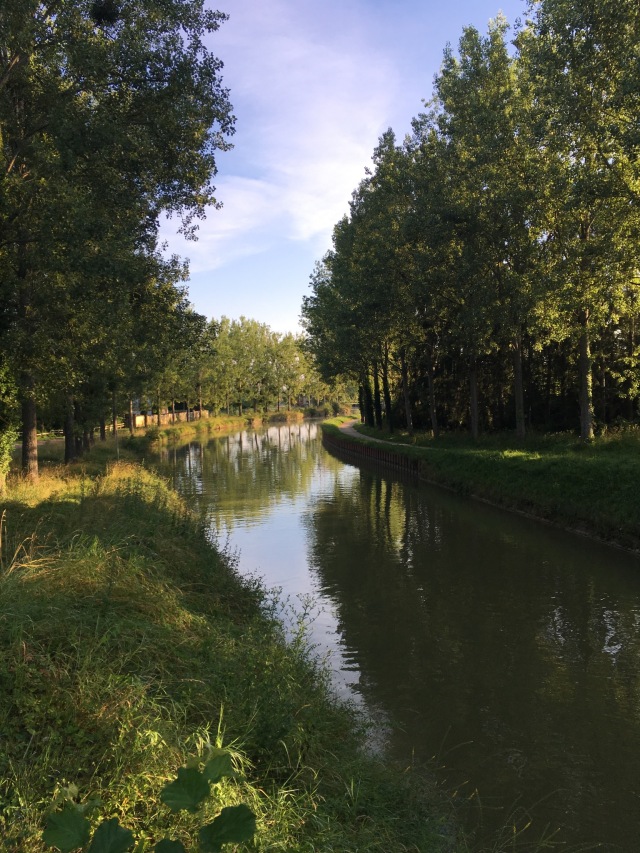 So things were going well. Right up to when our bow thruster stopped working just before we started a staircase of locks. 14 in 5 kms. Nothing we could do but continue on without it. Lots of boats don’t have a bow or stern thruster so it’s not essential. In fact real men don’t need bow thrusters apparently so there you go. They are just really handy!

This real man doesn’t need a bowthruster. Lunch in the lock.

At 3.30pm we stopped for the day at Pouillenay. There are a few bollards, a water robinet and two picnic tables under some trees. The temperature went over 30° on the deck. We walked the 600m into the village but the shop was closed.

Funnily enough we were tied up next to a Nichols hire boat with a couple from Wanaka (South Island, New Zealand) onboard. Small world!

Onboard garden is doing well.

So a mixed day. The locks were good but losing the bowthruster wasn’t ideal. I guess that’s boats for you. Never a dull moment. (Bound to be expensive). Speaking of which, the next day things got complicated. Did you hear the one about the Dutchman, the Italian and the Kiwi? Stay tuned…

Alan and I divide our time between our apartment in Christchurch, New Zealand, and our 11.5m Dutch Cruiser, Silver Fern, on the canals in France. We started out hiring and eventually bought our boat in 2014. The two summers lifestyle is wonderful and we feel very lucky!
View all posts by khodges2013 →
This entry was posted in Uncategorized. Bookmark the permalink.

3 Responses to Montbard to Pouillenay. The start of the staircase locks.