Tuesday, August 9th. Guess who ran out of internet again? Can hardly believe we went through €80 and 10gigs in 18 days! We can’t work out how we are chewing through 10 gigs so quickly. So there was no internet for us until we could recharge. Not such a bad thing really.

Anyway, last time I wrote we had arrived in Pont d’Ouche, a lovely little mooring with a bistrot attached that does a roaring trade and is run by Sonya, who speaks quite good English and very fast French. Electricity is €7,50 a day and an extra €1 to add water. Quite expensive but they do have nice, although short, finger pontoons and of course the bistrot that plays jazz and blues music and has a very good regional wine list. Also free wifi in the restaurant. The downside is noise from the Autoroute bridge flyover nearby.

On Thursday the forecasted rain came pouring down so an inside day for us. We watched three movies in a row, only the second time we’ve watched tv since we left Auxerre I think.

By Friday the weather had cleared and we headed off to the mooring at Le Bussiére, only two hours away. From here we biked to the Abbey de la Bussiére, once a Cistercian monastery built in 1131, now beautifully renovated and is one of the premier country house hotels in France. We ignored the private property sign since the entrance gates were open and biked in. (Although after we left we noticed they had locked the gates again. We tried not to take it personally).

The receptionist kindly allowed us to have a look around the hotel building and grounds. Truly spectacular! The interior is opulent with only a handful of rooms inside the main Abbey building and they have also transformed exterior building like the Pavillion and Maison des Soeurs into suites. 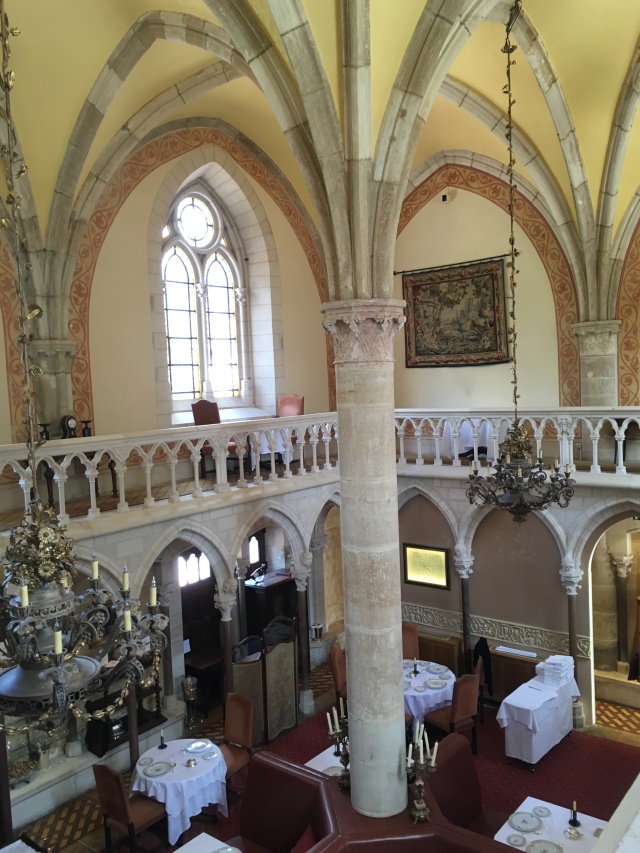 The exterior and grounds are beautifully manicured with many topiary trees and bronze statues, a babbling brook, a 13th century wine press and cellar and a 16th century dovecote.

The abbey church, while originally part of the estate, is now the village church. We were lucky enough to have a guided tour in broken English with the caretaker.

In the cemetery there are WWII commonwealth war graves. A downed Lancaster crew. Seven graves including two Kiwis aged 23 and 20. The date was 13th August 1943. Sobering.

Sunday August 7th we departed Le Bussiére and only two and a half hours later we arrived in Moulin Banet. What a great spot. Shady trees line the bank, there’s power,€3.5 per 24 hours. Water is available in the lock. Both are run by the little restaurant in the old lock cottage. We were able to swap some books too. Very nice place. 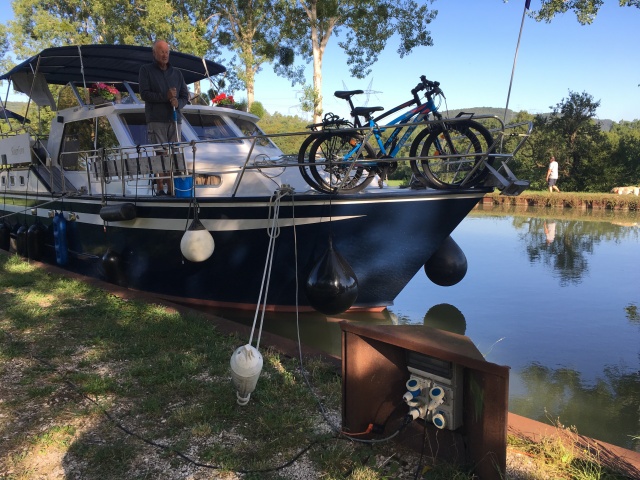 The following day we had a bit of a mishap. Here’s what happened.

We entered a lock with Mick who we have been traveling with on his boat coming in behind us. I put a bow line on and Alan was about to do the same at the back. All good so far. I must add here that the lockeeper at this lock was allowing his kids to help operate the lock. The lockeeper was a hugely fat man wearing a dirty teeshirt and track pants. His son, probably about 14, wore a pair of togs and nothing else. He was a little odd, marching around, showing off his muscles. The daughter was maybe 10. Anyway as Alan was about to tie up the back the son strode up to the front of the lock and wound the handles all the way, opening up the sluices gates and the boats started descending very quickly. We only had a front rope on and consequently the stern swung across, the lip catching on the top edge of the concrete lock, holding that side up while the rest of the boat tried to descend. Standing at the front I looked back to see the boat tilt severely, almost lost my balance and then, with a horrible grinding noise, the boat fell off the edge and crashed into the water, righting the level and causing the rest of the boat to tip up precariously.

It was quite a shock. The paint on that edge was scraped off, down to the metal, but other than that we came out ok. Amazingly nothing inside had broken except perhaps my nerves! We continued on to the next lock. I noticed the son wasn’t allowed near the sluice handles after that but there was no explanation or apology. We didn’t say anything because there’s no point.

After five and a half hours we reached Velars-sur-Ouche and moored right outside the Colruyt supermarket. We were running low on supplies so stocked up with groceries and fuel.

9am the next morning we headed off to the next lock, this time with two other boats, Mick and a French boat. We just managed to squeeze all three in with nothing to spare and repeated the process for the next three locks until we reached Plombiére-les-Dijon where we and Mick stopped and the third boat continued on to Dijon.

The Plombiére mooring was full of weed and lots of boats but we squeezed in behind a hotel peniche. No water or power. Alan took the opportunity to touch up some of our grazed paintwork and while the paint dried he biked the six kms into Dijon to recharge our internet. He’s a machine! I’m ‘resting’ my sore elbow/arm so no biking for me today. We have a reasonably long day tomorrow, motoring through Dijon and out the other side. We aren’t stopping as the port has fallen into disrepair and we hear it’s full of drunks sleeping rough. Our plan is to head through and stop for the night somewhere south of the city. We are heading to our home port of St Jean-de-Losne which is the end of the Canal de Bourgogne and should reach there on Thursday in time for a forecasted hot spell this weekend. We can have power there and a fan in our cabin. The last few nights we have been without power which is fine when the temperatures aren’t soaring!
Pont d’Ouche to Le Bussiére 7 kms, 6 locks, 2 hours
Le Bussiére to Moulin Banet
9kms, 7 locks, 2.5 hours
Moulin Banet to Velars-sur-Ouche 13kms, 11 locks 5.5 hours
Velars-sur-Ouche to Plombiére-les-Dijon 6kms, 4 locks, 2.5 hours 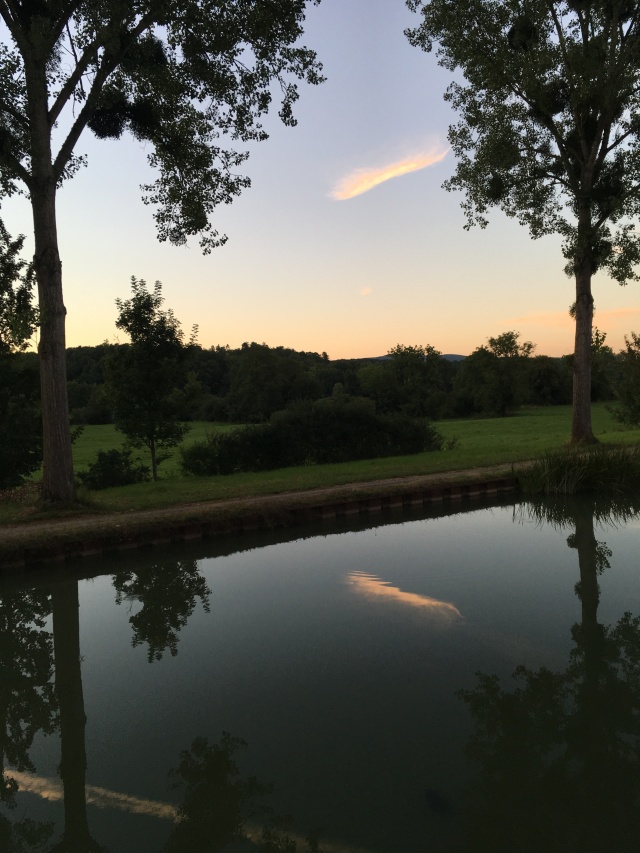 Alan and I divide our time between our apartment in Christchurch, New Zealand, and our 11.5m Dutch Cruiser, Silver Fern, on the canals in France. We started out hiring and eventually bought our boat in 2014. The two summers lifestyle is wonderful and we feel very lucky!
View all posts by khodges2013 →
This entry was posted in Canal de Bourgogne, French Canal boating, Holiday 2016, Wifi in France and tagged burgundy, Canal de Bourgogne, canalboat, Le Bussiére, lock keeper, Moulin Banet, Plombiére, Velars-sur-Ouche. Bookmark the permalink.