Lock cottage turned into a museum.

Wednesday 10 August. Plombiére was a good mooring. No power or water available, at least where we were, which is surprising considering it’s a reasonable size. There are very dilapidated electrical points but they don’t work. The lockeeper showed up late and we didn’t get into the lock until 9.30. None of the locks were set in our favour today so there was a lot of floating around waiting. We passed through six locks before the lunch break which found us to the south of Dijon next to the train line.

The Canal de Bourgogne has a real problem with weeds (les herbes) in the water, clogging up propellers and getting sucked into the water intake. And it’s pretty bad around the Dijon area. The VNF are addressing the issue. We have seen a weedeater boat sucking it up today and you can see piles of it beside the canal. After Dijon the weed has been dealt with and the closer to the Saône we got the less there was. 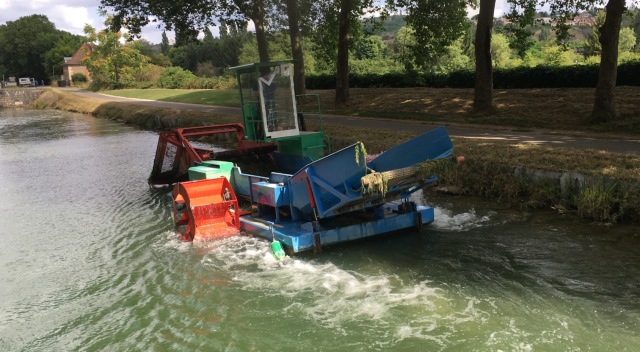 After passing through Dijon the canal runs straight through the plain for almost 30kms to the Saone river at St Jean de Losne (pronounced loan). Lots of industry and then fields with yellow crops and green trees against a blue sky. Very pretty and peaceful. There’s also Dijon airport nearby but this has been disbanded we were told, the military having pulled out last year and by the end of this year it will be closed down completely. 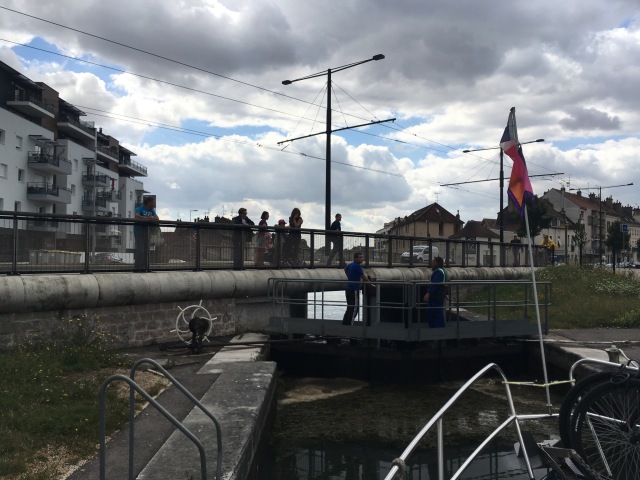 Passing through one of the locks in Dijon with some onlookers, two of them from Melbourne! 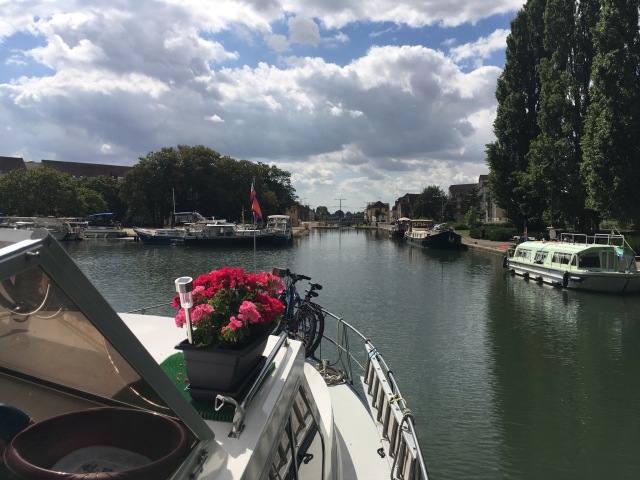 By 5pm we reached our tie up spot just after lock 65 close to the village of Breteniére. There are three bollards spaced far apart. There was a barge tied in the middle but room for us behind. Today we put in an eight hour day completing 17 kms and 16 locks. I was really knackered and went to bed early. Alan went for a stroll and checked out the village. No shops but it’s a nice area near a large apple orchard. Very quiet.

Thursday 11 August. Our last day on the Canal de Bourgogne! A cold morning, 10° outside, 15° inside. We headed off on schedule at 9am, thinking the lockeeper won’t be there but he was! We met him yesterday and chatted about Lord of the Rings. Very nice guy. Thinks New Zealand is perfect so we liked him 🙂

The vast majority of the eclusiers on this canal have been great. We heard scathing remarks about them but that hasn’t been our experience. We have had a few problems but one thing I think may help is that we always start the day at the lock at 9am. Telling them the day before means they can coordinate their staff and put us into their planning. The downside of course is you have to know when you want to leave which can be difficult when you haven’t yet seen the mooring. Will there even be space for us and if it’s nice maybe we might stay longer. The eclusiers have often come to our boat and asked when we want to leave. That’s good service. Another bonus for us is that students are working as eclusiers on this canal in the summer and they are polite and keen to speak English and seem very happy.

But back to our last day on the Bourgogne. The weather warmed up and we cruised through the last locks, giving way to a few more hotel barges, and arrived in St Jean de Losne about 4pm. We had a quick blat out on the Saone river to give the boat a bit of a run then headed into a mooring at Blanquarts where we immediately saw friends from Christchurch on their boat!

Agricultural scenery on the canal between Dijon and the Saône river. 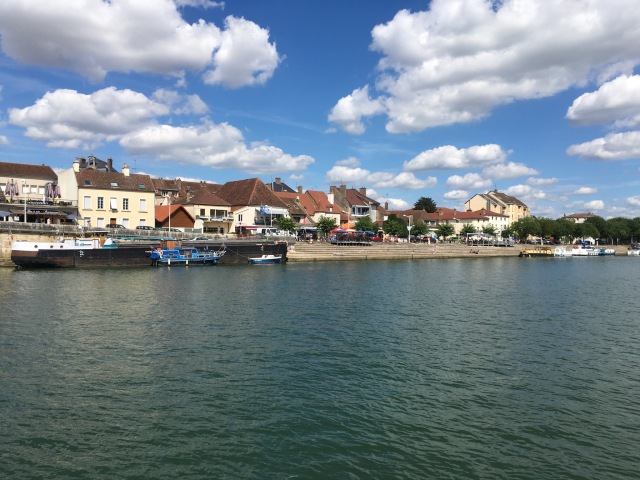 Back out on the Saône river. St Jean de Losne quayside mooring.

It’s great to be back. We will be catching up on the washing, groceries and general boat maintenance as well as get a mechanic to check out the bow thruster issue. The weather forecast is for hot temperatures and not much breeze until next weekend. My fibromyalgia issues are catching up on me so I’m looking forward to a good rest with no locks for a while. Yay! And a bonus, Wifi is part of the mooring fees! Hurrah!

6 Responses to Plombiére-les-Dijon to St Jean-de-Losne on the Saône river.