Last time I wrote we were in Charmes and it has pluses and minuses as a place to moor. The power and water at €9.44 (including tourist tax) was a reasonable price (showers were available at an extra price) and there are shady trees but under those shady trees are parked lots of camping cars, at least 25 while we were there. Also the large overhead bridge was very busy and loud on a Monday morning. Still it was 33° so the power to run the fans was well worth the noise and busyness.

Still we decided to just stay one night. Up at 7am thanks to the church bells tolling for 10 minutes I did my yoga in a nice cool temperature, Alan nipped into town for baguette, and we were at the first lock when the lights went on at 9am.

We cruised down the canal, leaving the département of Vosges and entering the Meuthes et Moselle. Cycleways run alongside the water and we have seen quite a few cyclists as well as walkers, some stopping to watch us descend in the locks.

The countryside is full of trees and agriculture, a lot of corn, maize and hay and the heat picked up as the day went on. 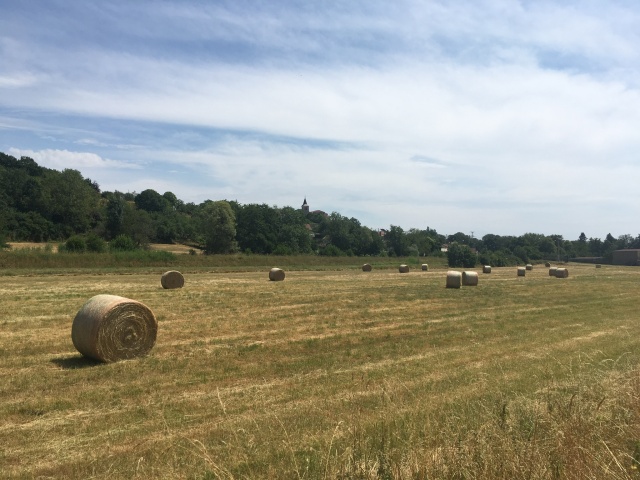 After 6 hours and 13 locks under the 33° sun we called it a day and tied up along the canal under a tree and then an hour later moved over to the other side with better shade in the evening. A lovely quiet spot.

The next day we leisurely moved 4 kms and 2 locks (one of which broke down and we had a bit of a wait) then pulled into Richardmènil, a quay side mooring with power and a town 800m up a steep hill. The forecasted rain didn’t show up and other than thunder the evening continued to be stiflingly hot. 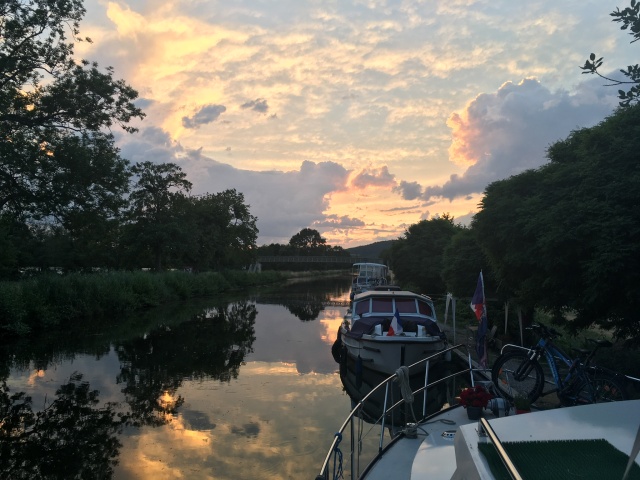 That delayed rain (further afield there was a lot of hail but we were lucky and the storm bypassed us) eventually arrived in the late afternoon but not before we trekked up the hill to the supermarket and boulangerie for supplies.

The following day it rained consistently so we stayed put and enjoyed much cooler weather. Well I enjoyed it. Only 18°. Bliss!

So Friday morning dawned a beautiful day and after yoga and breakfast we headed off at 8.50, clearing the next two 3m locks and placing the télécommande (lock remote control) in a metal box at the second lock. From there we were heading into commercial lock country, onto the Moselle. The next lock was a big deep one, 7.10m deep and long enough to fit a 172 metre commercial barge and pusher, luckily there wasn’t one waiting. There are lack of water issues along the Vosges and Moselle at this point in the summer and we waited an hour and a half to complete this lock process due to waiting for another boat to catch up (45 mins) and the slowed down filling and emptying of such a massive lock. The éclusier did come down from her control tower to let us know about the wait so we had coffee and sat around until the other boat (a Finnish yacht) finally arrived. We could have stayed in bed an extra hour but it was fine and the lock filling so slowly made it an easy trip down.

Onto the Moselle river and the big commercial base at Neuves-Maisons.

Waiting in the big commercial lock, all by ourselves.

Finally we were underway after descending 7.2m

We had to wait for the yacht at the next commercial lock as well, their speed much slower than us but it was only 45mins to pass through. Between the big locks the Moselle River has trees all the way, very quiet and peaceful and we took turns lounging up at the bow while the other one drove. 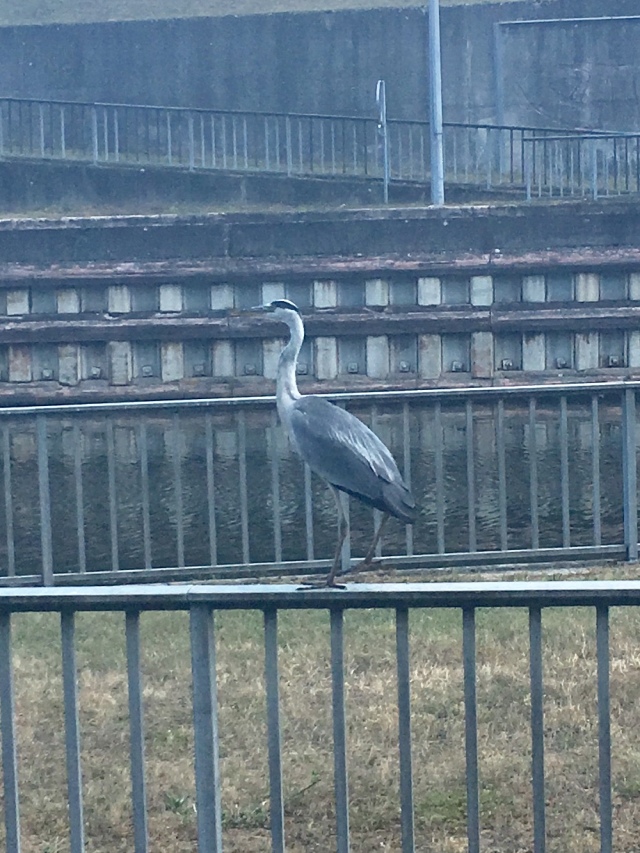 A friend waiting with us in a lock

By 1430 we arrived at the first of 3 locks in Toul. I called the éclusier on VHF channel 20 and he set up the lock for us, 4.4m deep but only 37m long. The yacht followed us in but once through the lock they carried on while we turned onto the Canal de la Marne au Rhin, through three more locks and a lifting bridge, finally arriving in Toul at 4pm and just managing to squeeze into a mooring space. The port was looking pretty full.

The reason the port was almost full could have been because that weekend they had a water festival in the port which included water jousting! Small boats with 4 paddlers, 1 person at the rudder and the jouster himself suspended on a metal platform over the top of the rear of the boat wi5 a long metal pole in hand. Teams compete in rounds of jousting, the idea being to paddle at each other then try to push the other jouster off his little ledge. Hilarious to watch! We had an awesome view from the back deck of Silverfern. The event went all weekend with music, food trucks, and lots of other contests.

Toul, originally known as Tullum Leucorum by the Romans, became a Free Imperial City by the Middle Ages and was annexed to France by King Henry ll in 1552. By 1648 it was one of the Three Bishoprics, the others being Metz (where we are heading soon) and Verdun. This was a province of pre-revolutionary France. The town was sieged during the Franco-Prussian In 1870 and was a primary US air-base during WW1. There is a memorial to the Resistance of this area near the port. So a very long and fascinating war history here. The town is very pretty with a lovely square, loads of bars/restaurants and the remnants of the town’s fortifications everywhere. From 1874-1914 the Toul was one of the strongest fortified towns in the world. There is an interesting juxtaposition between the old masonary and cut stone forts built by the famous fortifications architect Vauban, LouisXIVs military engineer, and the modern Maginot Line concrete and artillary turrets. You can walk all over the ramparts and into the old moat and there are lots of parks and flowers.

Sheep grazing in the old moat

We have tried four boulangeries and found our favourite. There is even a baguette dispensing machine near the big Cora supermarket which we couldn’t resist trying. The baguette was a little doughy for my taste but not stale or hard. You can smell the baking inside the machine. Heavenly!

The cathedral of St Etienne (1221-1500) dominates the town and gives a Toul the wow factor. With a Romanesque plan and Gothic construction it has a Flamboyant Gothic facade and an amazing cloister built 11th and 14th centuries, one of the largest Gothic cloisters in France.  There is a sound and light show during the summer on the facade which we will be checking out soon.

The cloisters had some very interesting modern art sculpture 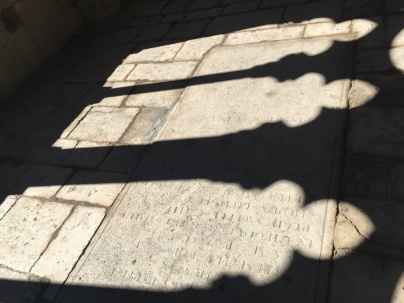 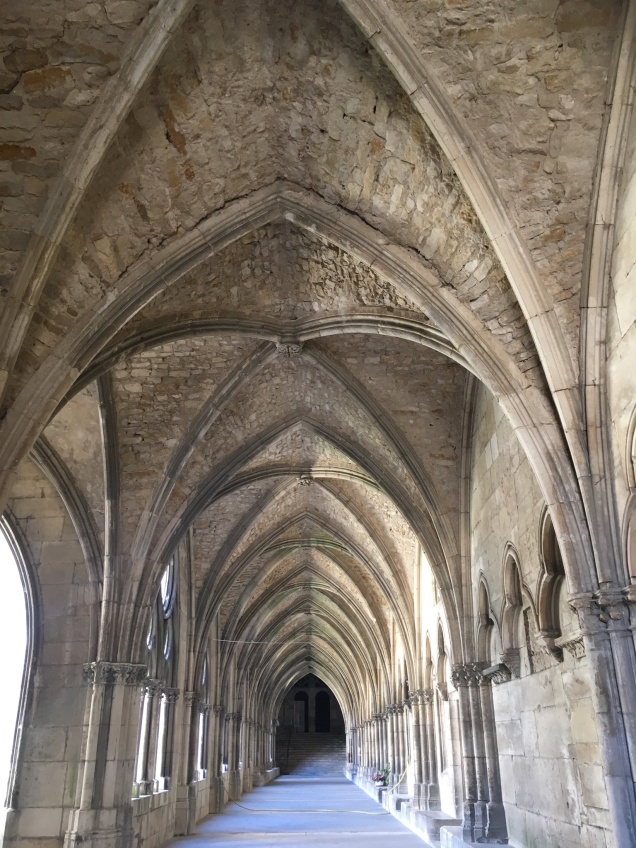 Wandering back streets of Toul

We’ve met some lovely people here too. Years ago Alan and I were in Paris before we had bought our boat and walked to the Arsenal port to gaze longingly at the lucky people on their boats and ended up chatting to an American couple who had a lovely barge. Here in Toul we met up with Perry and Fran again on Le Canard Qui Rit and they came over for a drink one night. We also had an aperitif with Barry and Margaret Craig on their boat one evening. It turns out they are from Havelock North and actually live in the same street Alan grew up on, Tauroa Rd. Small world is it not?

Deciding how much we liked Toul we inquired about making it our home base this year and a berth was available so we are staying in the North Eastern part of France for at least another year. There are so many sights to see here, especially if you are interested in the history of the two World Wars, but also beautiful cities and stunning architecture. The facilities are good at the port with showers and rubbish disposal and there is a boat mechanic nearby who we introduced ourselves to after a wander down the canal. 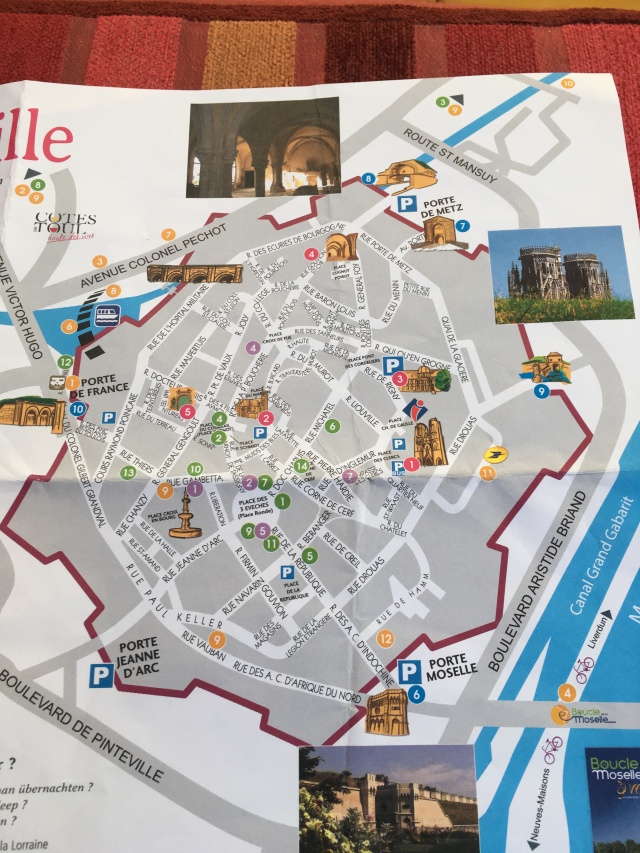 Map of Toul. We are moored near the Porte de France.

Silverfern amongst the jousting action.

This weekend is the 14th Juillet, France Independence or Bastille Day and we will be checking out the festivities and fireworks. Of course also there’s that small matter of France being in the World Cup Final with the playoff against Croatia on Sunday night to consider. Lord help us if France don’t win is all I’m saying about that! The cacophony of car horns when they won the semifinals went on half the night which just goes to show how much this game will mean on Sunday!

So here are the stats for this week:

Total this year so far

8 Responses to Charmes to historic Toul.