Verdun to Charleville-Mézières. The beautiful Meuse. 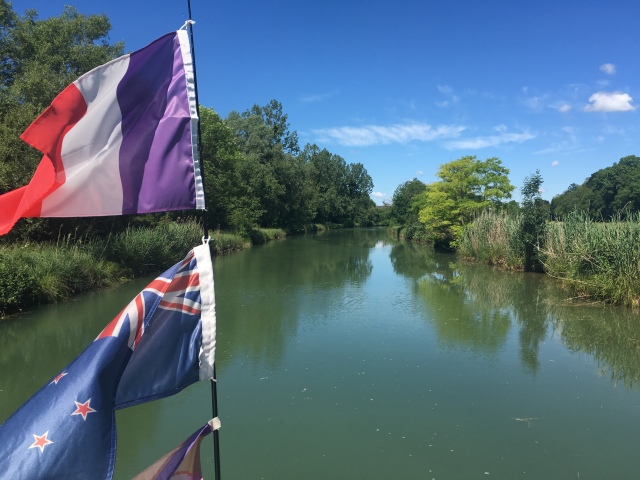 Leaving Verdun we continued our trip north with no fixed destination in mind and stopped for the night in Consenvoye where we cycled up to the German war cemetery. Here lie 11,146 German soldiers, a nurse, a Russian and 62 from the Austrian-Hungarian army in a beautifully kept treed cemetery. 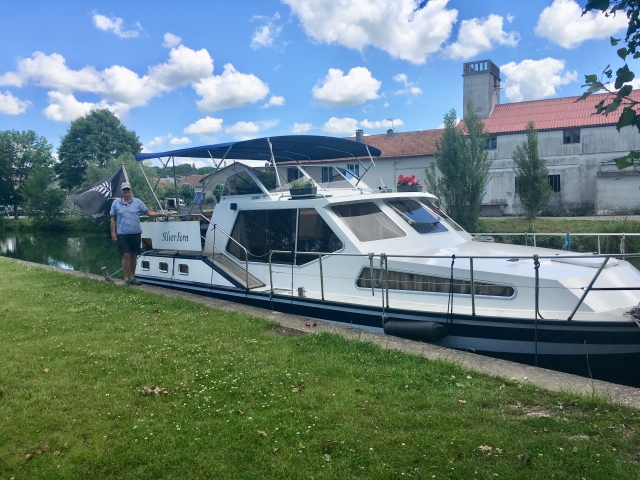 We tried out the bread from the bread machine as sadly there is no boulangerie in Consenvoye and actually the bread was excellent, much better than the offering from the machine in Toul.

The next day we headed on to Dun-sur-Meuse having our first incident in a lock this year, getting the rope jammed while descending and forcing us to quickly cut our way out of it, losing another good rope. These things happen though and we will just have to be more creative with the ropes we have left until we can replace it.

Dun-sur-Meuse is a great mooring although lots of biting bugs that had a good feast on me. You’re welcome. There is a steep hill with a fortress and church at the top with stunning panoramic views of the Meuse. The heat has really pumped up the volume with temps over 35°. It was a hot climb! 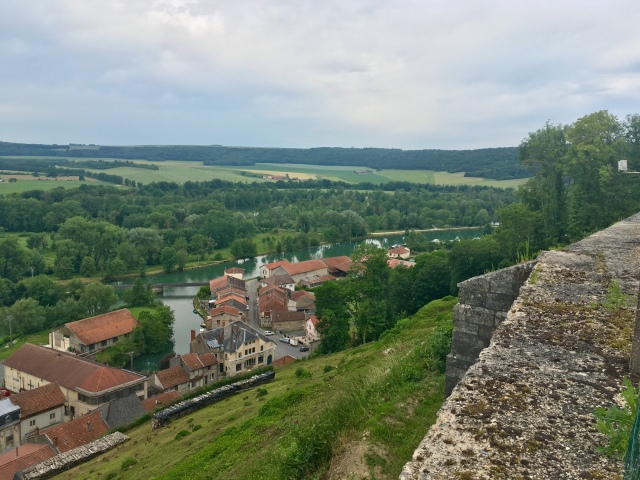 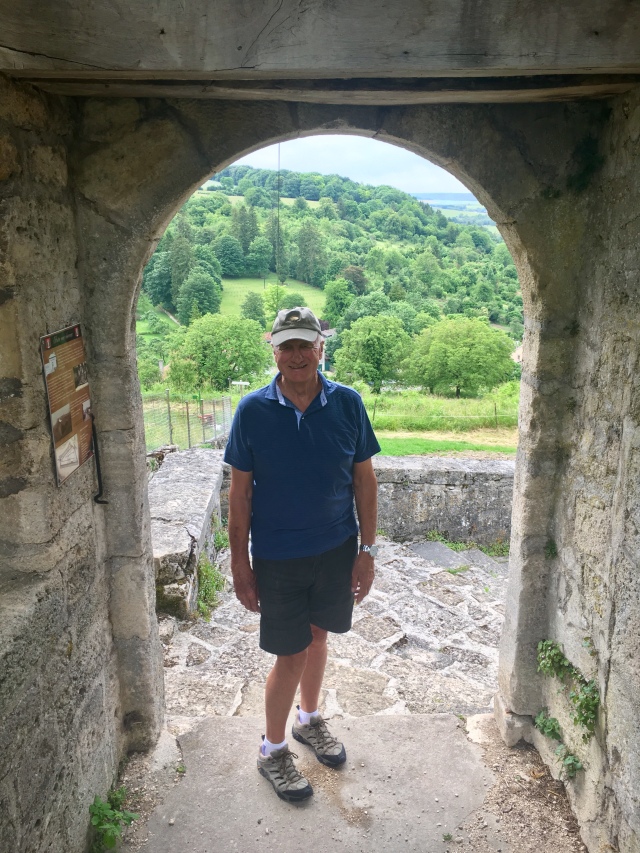 On the way back down the hill 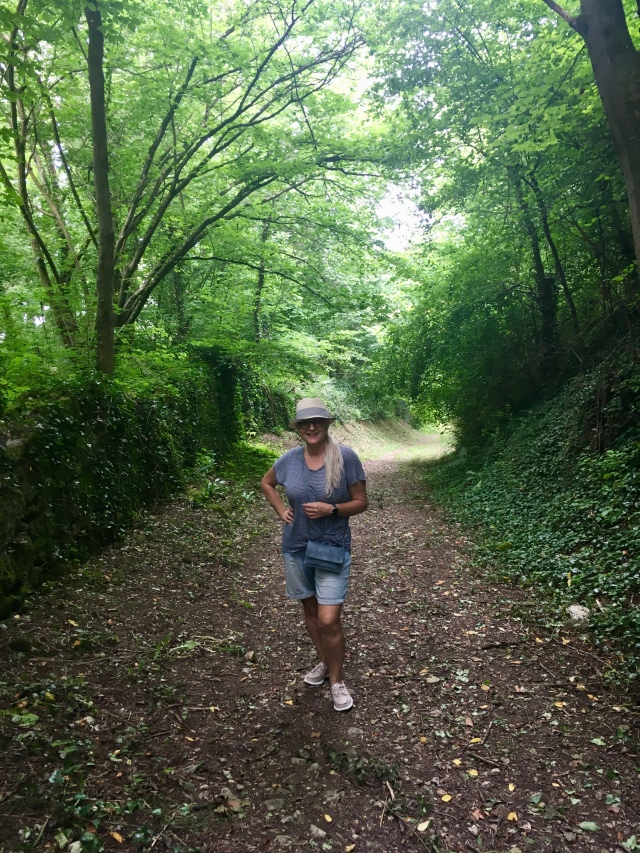 The following day, June 20th, was a cooler day (yay!). As we pulled up to the first lock the door jammed with a massive tree stump lodged in the way. We called VNF and reported the problem. A man arrived half an hour later but he struggled to move it. Eventually he put the lock through a cycle and let the tree stump out and an hour later we were on our way again. 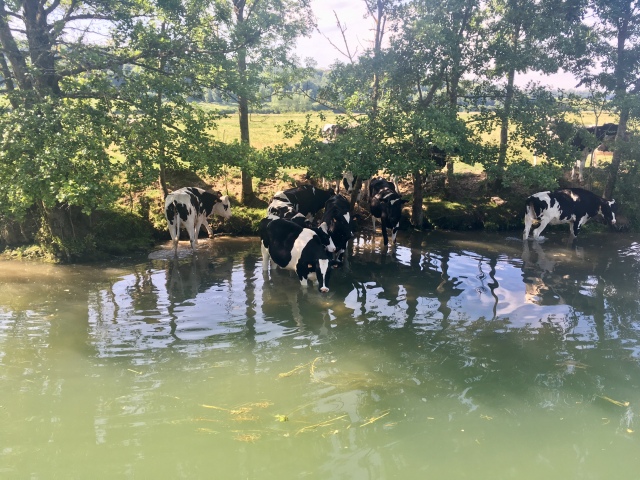 Remind me not to swim downstream!

It rained on and off all day and we tied up on Stenay for the night. The mooring is nice here but the town was a little disappointing with a lot of closed shops. The next day was market day with a few fruit and vegetable stands and a rotisserie chicken/paella caravan. We bought some salad veges then headed to the local Lidl for other supplies (wine and beer). Having ticked all the major food groups it was back to the boat to spend the day catching up on washing.

Heading further north we motored 25kms to the next stop in Mouzon. There’s a strong current here and we took a few attempts to get close enough to the quay to moor but finally managed and what a lovely spot it is. We visited the Abbey church, did a walking tour and tried to stay cool in this heatwave. 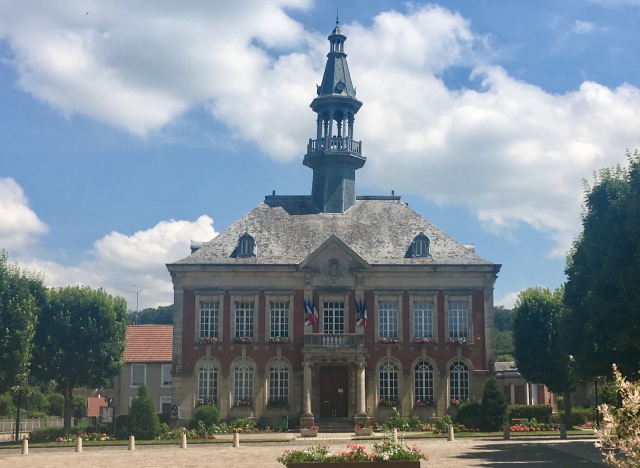 The mooring got very busy during our two days there and we had a lovely surprise to meet up with friends and fellow kiwis Tony and Kay on their new boat. We enjoyed having a drink with them on Silverfern that evening.

We dragged ourselves away from Mouzon on June 22nd and had a long day on the water to arrive in Charleville-Mézières and yay! a spot under some trees on the long quay.

As I said the canicule (heatwave) that is hitting all of Europe is upon us big time with talk of temperatures over 40°! Luckily there is the odd breath of wind on the river which is very welcome. This city is beautiful, well cared for with stunning architecture. Named after it’s creator, Charles de Gonzague, 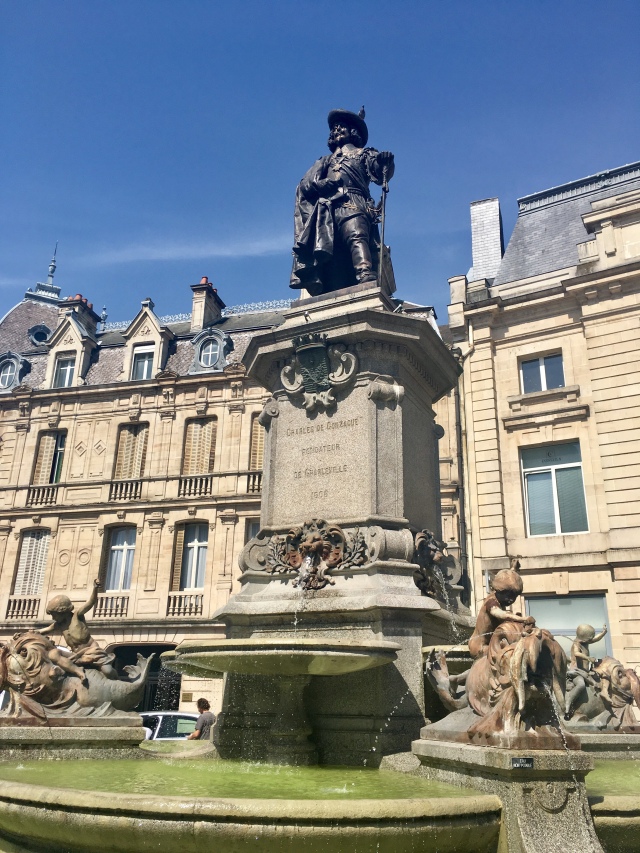 the ‘new town’ was built in the 17th century with roads leading to the beautiful Ducal Place with arcades running along all four sides, offering bars and restaurants as well as shops. 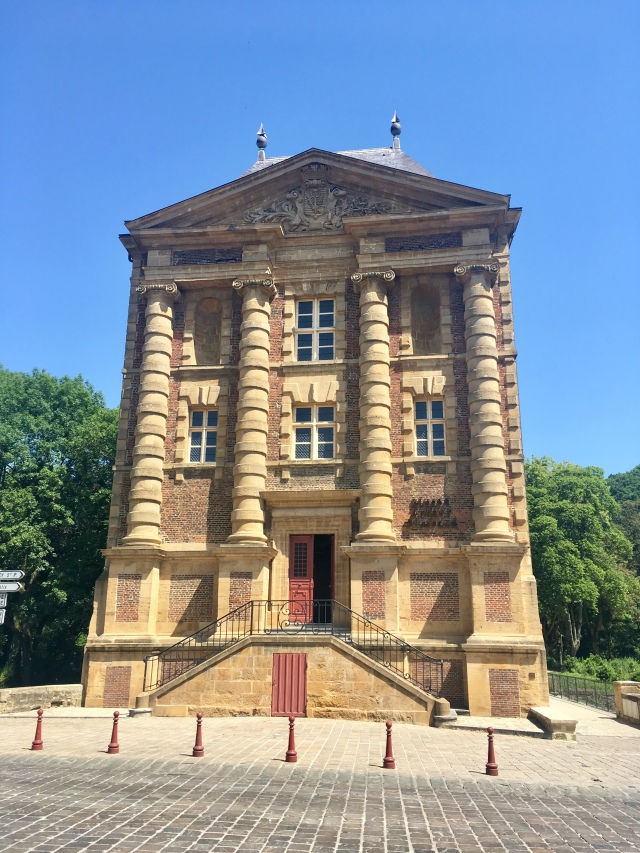 There is an amazing patisserie close to the Place with the best baguettes I’ve tasted this year.

We visited the museum of the Ardennes which has artefacts from 2000BC through to current day art works. They have a great collection marionettes from different countries as well. Charleville-Mézières is known as the World Capital of Puppetry Arts.

Last night there was a salsa dance class next to our mooring on the river. Great music. Brought back memories.

So we are here In Charleville-Mézières until Sunday. Today we found out just by chance that this canal/river will be closed at the southern end due to lack of water. Next Wednesday. Not very good news for us as the only other way south is the Canal des Ardennes which won’t reopen this year due to a broken lock. You really have to be flexible doing this lifestyle! After working out we would have to really put the accelerator down and race back (in the raging heat), in order to get through those locks by the closure date we’ve decided to carry on northwards and see what happens. Maybe it will rain all of July and everything will be open again, who knows. This is the hottest June on record apparently and the earliest waterways have been lacking water that we’ve encountered.

Total so far this year:

Alan and I divide our time between our apartment in Christchurch, New Zealand, and our 11.5m Dutch Cruiser, Silver Fern, on the canals in France. We started out hiring and eventually bought our boat in 2014. The two summers lifestyle is wonderful and we feel very lucky!
View all posts by khodges2013 →
This entry was posted in 2019 adventure on the French Canals, Canal de la Meuse, French Canal boating, Holiday 2019, Meuse and tagged Canal de la Meuse, Charleville-Mézières, Consenvoye, Dun-sur-Meuse, France, Holiday 2019, Meuse, Mouzon, Stenay. Bookmark the permalink.

10 Responses to Verdun to Charleville-Mézières. The beautiful Meuse.