Continuing on from my previous post we made the most of having a rental car and made a trip to Grévillers where there is a New Zealand memorial at one of the many British Cemeteries, which evokes the defence mounted by the New Zealand divisions in that sector from March to April 1918 and their role in the victory advance between August 8 and November 11. New Zealand lost 2600 men of which 450 are named on the memorial wall with no known grave.

Memorial wall with the names of 450 Kiwi soldiers who have no known grave.

We then drove on to the city of Amiens. We had a lovely lunch at a brassiere, did a walking tour of the old town, the Saint-Leu quarter and visited the impressive Nôtre Dame cathedral, built mainly by help by the ‘waidiers’, medieval dyers from Amiens who made their fortunes from the ‘guesde’ or woad, a dyeing plant that produced the famous pigment Bleu d’Amiens. At the Place du Don there are the oldest houses in town, called the ‘maisons à pignon’ or gabled houses. 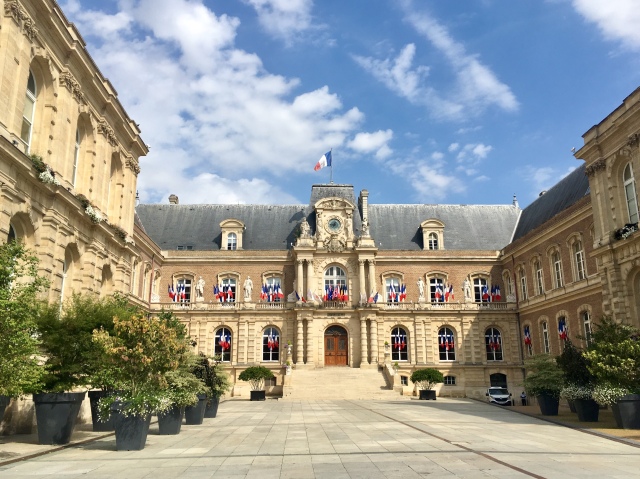 The Memorial to the New Zealanders who fell in the Battle of the Somme. Inside the Notre Dame.

From Amiens we headed to Albert to see the unusual church, Notre Dame de Bresbieres, shelled repeatedly in the First Wold War as it was a significant landmark, Albert being the centre of the Battle of the Somme. In January 1915 the golden statue of the Virgin and Child tipped over, still attached, into a horizontal position. From 1915 to April 1918 she stayed in that precarious position and became famous amongst British soldiers who sent postcards home of the “leaning Virgin”. They said “When the Virgin Falls, the war will be over”. They had it almost right, she fell very close to the end. After the war the basilica was rebuilt in the same style, the Virgin and child recast. 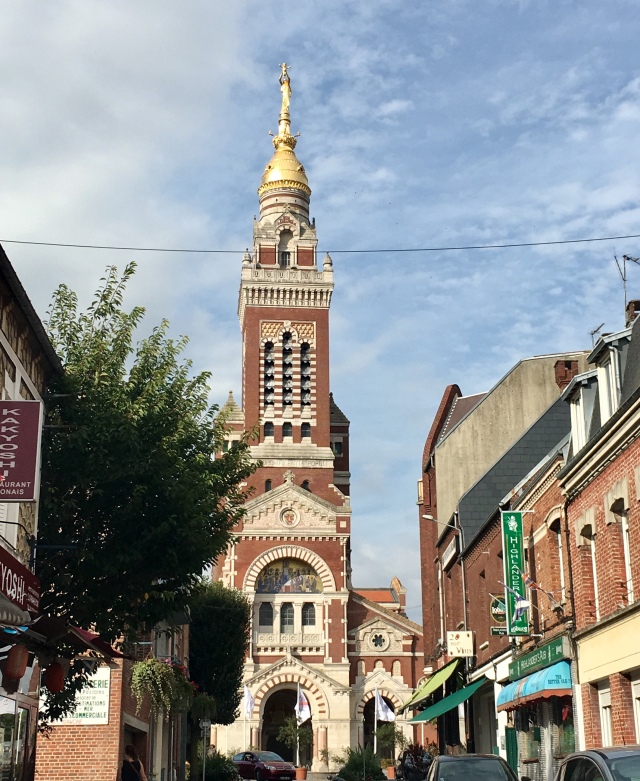 Notre Dame de Bresbieres with the Virgin and Child, rebuilt. During the last restoration in 2000 it took 40,000 gold leaves to cover the dome and statue

The horizontal statue until 1918

The Somme Museum, next to the church, is underground in the tunnels originally built to link the church to its gardens. A very good movie and interesting memorabilia in the fifteen different alcoves and 25 display cabinets, telling the story of both trench warfare and life in the tunnels.

It was a long day with four hours driving so we headed back to Valenciennes for the night. 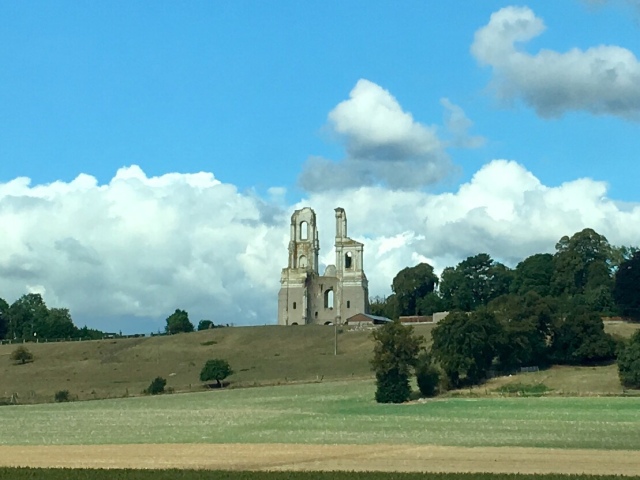 But the next day off we headed, this time to see the ruins of an Abbey in Mont-St-Éloi. This Abbey was originally one of the biggest of the region and now in its ruined state it is a symbol of the destruction wrecked on the area in World War I during which the top of the towers were destroyed. The weather was very changeable but I quite like the moody photo I took of the ruin.

From here we continued on to Lens to visit the amazing Louvre-Lens, an offshoot of the Louvre in Paris, built on the site of an old coal mine. A very modern gallery and a fantastically curated collection. 205 works chronologically displayed from 3500BC to mid 19th century, all civilisations and techniques represented. I was in absolute heaven and could have stayed all day. And it’s free! The Louvre Paris is amazing and I’ve visited a number of times but it can be a lot for the senses, overwhelmingly so, and what the Louvre-Lens does so well is give you the right size bite of art in its many forms and allows you to place art within its time in history.

The Galerie du Temps, which is central to the Louvre-Lens project. 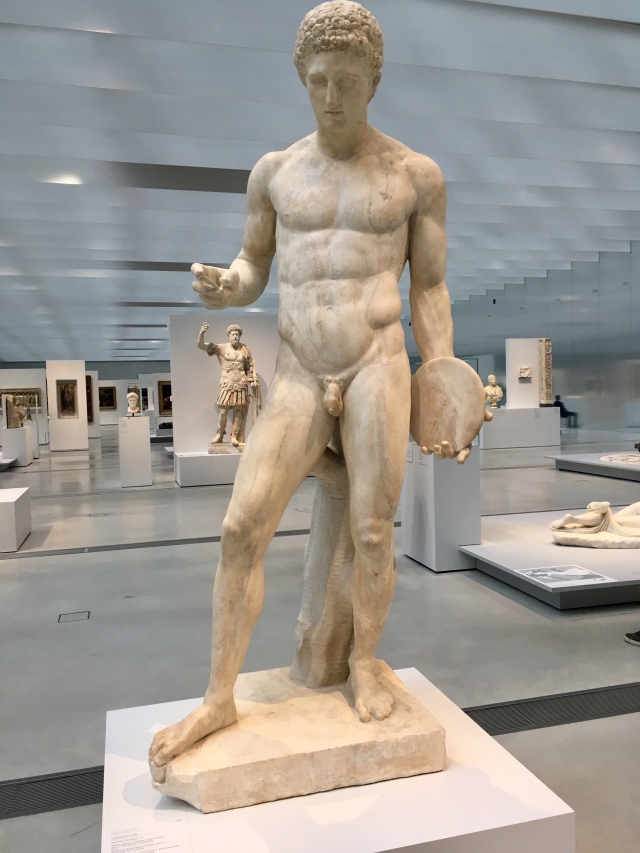 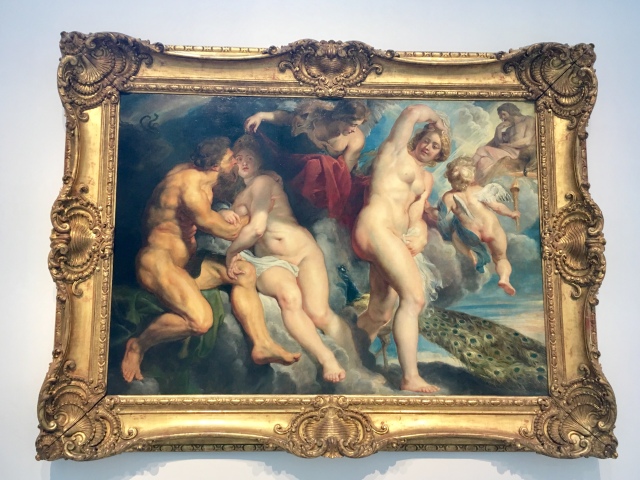 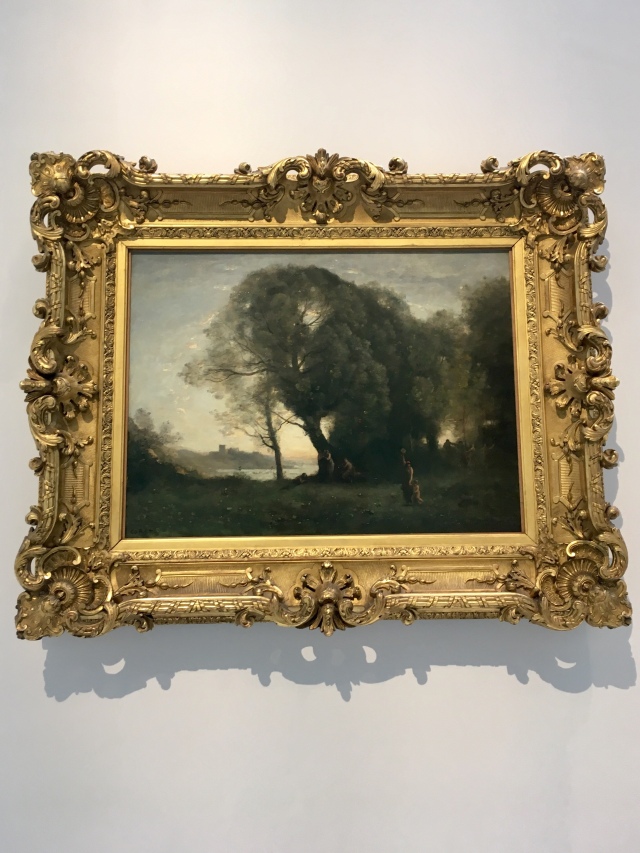 Having filled up on art we visited the impressive Canadian Memorial at Vimy. 9 April 1917 they and the British stormed and took the Vimy Ridge. There are still shell craters dotting the area and possibly unexploded bombs. The memorial is a tribute to all Canadians who fought in the war and bears the names of 18,000 of which 11,285 have no known graves. Heartbreaking. 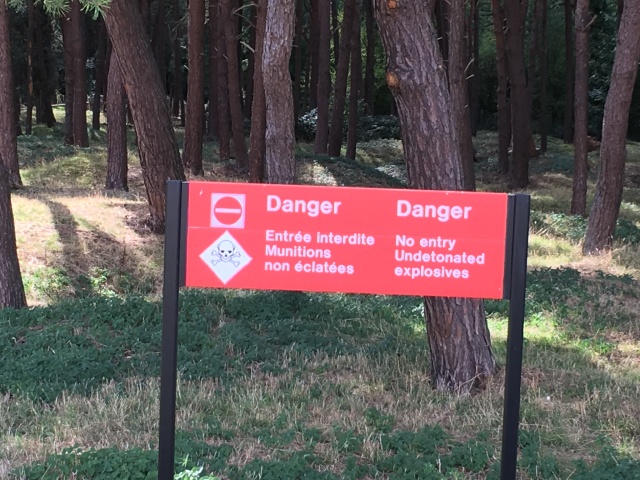 We also visited the Lichfield Crater in Thelus where British soldiers are buried. There are memorials everywhere here testifying to the carnage World War I created.

So we finally headed back to Valenciennes and on Monday returned our car to Europcar.

It was well worth the €144 and we saw so much more than if we had just visited the Somme on our boat.

The good news is our favourite boulangerie has reopened after their 3 week congé (leave) and we’re back to delicious baguettes only 10 minutes walk away. Dangerous! The big supermarket is about 30 minutes walk each way but there is a Lidl closer for potluck grocery shopping. The weather has turned very autumnal compared to last week with temperatures 22° and under. Some nights the temperature is down to 5°! So it must be time to head back to New Zealand. We have a couple of weeks to tidy up the boat and get it ready for winter then it’s back on the Etihad flight to Abu Dhabi, Melbourne and then Christchurch.

We’re looking forward to getting home!

Our total statistics on Silver Fern for 2019

Alan and I divide our time between our apartment in Christchurch, New Zealand, and our 11.5m Dutch Cruiser, Silver Fern, on the canals in France. We started out hiring and eventually bought our boat in 2014. The two summers lifestyle is wonderful and we feel very lucky!
View all posts by khodges2013 →
This entry was posted in 2019 adventure on the French Canals, Albert, Amiens, French Canal boating, Grévillers, The Somme and tagged Abbey Mont-St-Éloi, Albert, Amiens, Europcar, Grévillers, Holiday 2019, Lichfield Crater, Louvre-Lens, Nôtre Dame de Bresbieres, The Somme, Valenciennes, Vimy. Bookmark the permalink.